Leaving Nothing To Chance

Promotion A Clear-Cut Business – As Usual 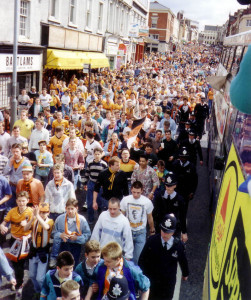 Wolves fans celebrating the winning of the 1988-89 Third Division title.

For all the frustrations and at times impatience that come with following Wolves, one thing is reassuringly obvious: when they do click, they get it right in a big way.

Here’s something for starters…….the club have now won five titles in 30 years. Ok, this one has not mathematically been secured but the combination of results required to deny them is so freakish as to be virtually irrelevant.

The Championship crown is coming to Molineux and the manner of this return to the top flight is very familiar.

Graham Turner’s Wolves were Fourth Division champions in 1987-88 by five points, had eight points in hand on Sheffield United when they went straight through Division Three 12 months later and, a full two decades on, Mick McCarthy’s side had Birmingham as their distant runners-up (seven points behind them) when they graduated.

Predictably, the going was no tougher after Wolves had slipped back to the third grade. Under Kenny Jackett in 2013-14, they wrapped their hands round the title with no fewer than nine points to spare, their total of 103 not surprisingly being way too many even for their closest challengers, Brentford.

Now, we wait to see how wide the final gap is this time and can also reflect in the meantime on the ample leeway when the club achieved three more of their post-war promotions.

Amid the disappointment of being pipped to Second Division top spot by Coventry by a single point in 1966-67, Ronnie Allen’s squad had six in hand on third-placed Carlisle – and that in the days when there were only two on offer for a win.

Wolves were champions at that level ten years later under Sammy Chung, the two-point margin they held over runners-up Chelsea being small in comparison with the six by which they headed the Bolton side who occupied he first of the ‘near miss’ positions.

Promotion under Graham Hawkins despite considerable financial hardships in 1982-83 was achieved in the distant slipstream of QPR but again the gap over fourth place was very marked – six points to be precise. 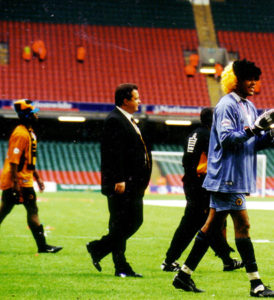 So don’t Wolves have any experience of last-day dramas when they go up? Well, they did when Dave Jones was in charge.

No-one present will forget the joy and relief of so emphatically winning a 2003 play-off final against Sheffield United that virtually everyone had said would be too close to call.

But we would all swap that big-match play-off excitement with the sort of lower-stress alternative that we have again been enjoying these last nine months.