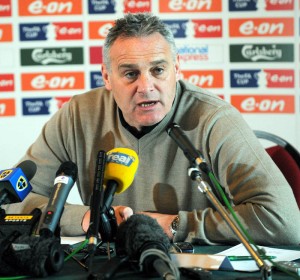 “Go for a night out with my team-mates? I don’t like them!” It’s not what you want to hear from inside your club but it came tonight from the horse’s mouth about one of Wolves’ promotion winners.

Not, we’re glad to say, one of the current heroic breed but a member of the squad who made the same transition from Championship to Premier League in 2003.

Dave Jones was on stage and talking openly about the players who prevailed in style in the play-off final against Sheffield United in Cardiff.

“They hated each other and didn’t want to socialise,” he recalled. “But put them on the pitch and they would die for you,” he said. “I remember trying to organise a squad night out and Dean Sturridge said he didn’t want to go because he didn’t like them.

“They were here to do a job but they got on so well on the pitch.”

Jones and Graham Turner were back in the limelight for the ‘Tales from the Dug-Out’ 30th anniversary Wolves Former Players Association dinner and clearly rather enjoying themselves.

The thing about time is that its passing loosens constraints. Men who were guarded, suspicious even, among those wishing to pry too much about Wolves during their time, now tend to open up considerably with a drink in their hand and an audience to entertain. Especially if they perhaps consider themselves to be in managerial retirement.

The duo have earned a highly significant place in Wolves history, Jones as the first man to lead the club to the Premier League and Turner as one of the individuals to have done much for the survival and rescue effort in the late 1980s, complete with successive lower-division titles, Sherpa Van Trophy success and Steve Bull goals galore.

In more recent times, the story has been leaking out about Jones’s relief in not having to sack Paul Butler, his ‘Harry Potter’ (dressing-room nickname) and ‘fantastic, fiery leader’; someone he never wanted to get on the wrong side of. Now he has gone a little further.

To cut to the chase, the centre-half clashed with Michael Oakes during a home game, goalkeeper coach Bobby Mimms sided afterwards in words and in print with the quiet former Aston Villa man and Butler took his own action next day by decking Mimms and telling him never to speak in the press about him again.

There nearly wasn’t the chance to do so. Jones admits it was a sacking offence and pondered hard over how to resolve this thorniest of matters. He was grateful when Mimms, to his great credit, came forward and said he wanted no action taken and everyone should move on.

The manager also recalled how, in the middle of the 2000-01 season, he had been given the wrong address for his interview at Sir Jack Hayward’s London office and knocked on a door that was answered by an Iranian woman. But he knew he was in the right locality when Dave Bassett emerged from a nearby property.

Jones and his chief scout George Foster sat on the bank at the training ground on the first day and didn’t like what they saw. Sir Jack thought the new man had said he needed eight new players; the truth was actually that he wanted to keep only eight players – and that from a squad of around 30. 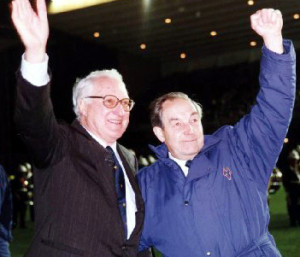 Sir Jack Hayward and Jack Harris on the night in 1993 when the completion of Molineux’s redevelopment was celebrated.

Dave has always known how to apply a little spin and this lovely occasion didn’t pass without him raising some eyebrows. He said he was told, for example, that there was only £2m to spend after the winning of promotion – really?

By then, his relationship with Hayward had deteriorated after the spectacular squandering of a top-two spot 12 months earlier.

“My criteria was to get the club promoted in three years,” he said. “I managed it in two and Sir Jack said I should have done it in one. We were a yard apart when I handed him the trophy at Cardiff – I basically threw it at him!”

MC Johnny Phillips from Sky Sports was switched on enough in his role as on-stage interviewer to ask about Neil Warnock and amusement came with the disclosure that the then Sheffield United manager had felt a swift right hand on the touchline when Jones was irritated by comments emanating from the rival dug-out and told the fourth official he would take action if there was one more such utterance.

Jones went on to say Warnock was fine afterwards over a drink and there was none of the bitterness from Turner that we might have expected towards the present Cardiff manager given the hostility he had seen and heard from him in the past.

“Everybody has had confrontations with him,” Graham said. “He was a horrible bloke to have in the next dug-out, always inciting things. But we all had the same problems, like taking stick from the press and fans in tough times, and there was an affinity among us. The job he has done for many years is terrific.”

Jones admits he should have walked away when told of his budget for the Premier League. Only his ego kept him here.

Turner, on the other hand, said there was every reason for him to not take the job he was handed in succession to Brian Little in the autumn of 1986.

“The whole atmosphere was one of defeat and long-suffering supporters had decided to stay away,” he recalled. “It was a really depressing place.

“The only reason I came was because I was a Wolves supporter as a kid and Billy Wright was my favourite player. You wanted players who would accept the situation and not be fazed by it.

“If I was trying to sign a player, I always did it well away from Molineux, so they wouldn’t see all the present problems and the water dripping through the roof.”

Turner joked (I think) that the best training facility he had access to was the North Bank car park on a Friday. Jones, in turn, wondered how the late 80s lads would have coped with trying to bump the 2003 squad’s Rolls Royces and BMWs out of the way for practice matches to start.

Turner revealed that the best working area would have been the expanse between the Molineux pitch and the John Ireland Stand but, with the stadium then council-owned, the club had to book use of it – and couldn’t often afford to do so.

“I remember the reopening of the ground, as we came to know it, in 1993, and I stood with Billy and Puskas before the game against Honved,” he added. “What a thrill that was.

“The biggest regret is that I didn’t take Wolves into the top division. Money was tight for a number of seasons….it was only my last season that it was really available. 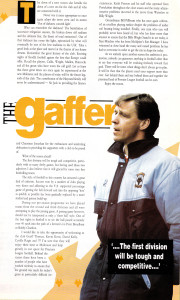 A Graham Turner photo and column from Wolves’ programme in 1993-94.

“We made five good additions and, with what we already had, I thought we had a really good chance. But Steve Bull and Geoff Thomas both suffered serious injuries and they were two very big players for us.”

And what about the end after the games at Chelsea and Portsmouth? “The players gave everything in losing by the only goal at Chelsea and were deflated when we played at Portsmouth only two nights later. Jonathan Hayward had a right go at them after we lost there and I asked for a meeting with him at 8am next day to tender my resignation. You can’t have your chairman berating your players like that.”

Wonderful stuff, all of it, with the high standards maintained by the comedy turn provided by Nobby Stiles’s son, John. Roll on the next time.