Alan Hinton in jovial mood with the son of his former Derby manager.

Tuesday, April 3: Loved meeting up again this afternoon with Odin Henrikssen from Bergen and other fans over from Scandinavia for this evening’s Championship home game against Hull. Such dedication! What was more surprising was seeing Wolves’ team coach outside and learning that the squad were using the same hotel for their pre-match preparation. While having a cuppa in their presence, I received a call from Molineux’s pitch-side announcer, Jason Forrest, summoning me to a deserted stadium for a filmed chat regarding my imminent Between the Golden Lines book.

Wednesday, April 11: After several unsuccessful attempts, managed a proper face-to-meet meeting at last tonight with Alan Hinton. My only previous dealing with him, in person, was when I secured his signature as a youngster in the early 1970s. Alan kindly found time for a few minutes’ chat in one of the Billy Wright Stand guest rooms after watching the meeting of two of his former clubs, Wolves and Derby, in the company of family members and his long-time Wanderers pal, Graham Newton. The legendary winger has lived in Seattle for decades and is off tomorrow for a week of Portuguese sun.

Sunday, April 15: Another wonderful atmosphere at Molineux today for the celebration of the promotion that was secured by Brentford’s late equaliser at Fulham last night. Glad that Andy Thompson – twice a lower-division title winner at the club – was in his usual place in the press box for the occasion. Also among us were Chris Iwelumo and Sylvain Ebanks-Blake, two of the goal-scoring stars of the Mick McCarthy squad who went up to the Premier League in style in 2009.

Tuesday, April 17: Enjoyed booking a table for four and having a meet-up with Wolves Heroes’ number one guest contributor, Charles Bamforth, on the final leg of a long trip that has taken him to New Zealand for several weeks, Belgium, his Lancashire roots and his wife Diane’s native Cornwall. So nice to be able to say a proper thank-you to him for his kind and determined efforts and to raise a glass to our very good mutual friend, Les Wilson.

Thursday, April 19: Put in a shift as chauffeur to support Richard Green in his sterling work as organiser of tonight’s 30th anniversary Former Wolves Players Association dinner at Molineux. Had just ferried early 1970s reserve Gerry Farrell and his partner to the stadium from The Mount at Tettenhall Wood when receiving the call that Jim McCalliog and wife Debbie had checked in at the hotel an hour late after train delays. Oh well, they had taken the trouble to come down from Scotland to attend, so driving another few miles across Wolverhampton and back was small beer by comparison. With managerial duo Graham Turner and Dave Jones on centre stage and on form, this was one of the very best such occasions.

Saturday, April 21: Delighted to read that Terry Wharton had been made a guest of honour for Wolves’ title-clinching slaughter of Bolton at the Macron Stadium this afternoon. Being paraded in front of fans at two of his former clubs must have been a great thrill – and very well deserved!

Saturday, April 28: Campbell Chapman and Steve Bull were two of the ex-players I bumped into outside the ground before this afternoon’s final home fixture, against Sheffield Wednesday, with Thommo on radio duty once more. The pre-match build-up was brilliant, the presentation scenes at the end memorable and the match itself a little flat – something we can forgive this outstanding Wolves side for after the entertainment they have given us all season. 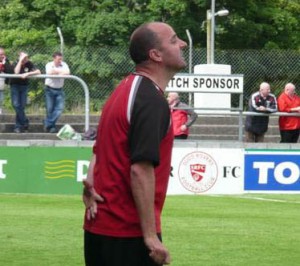 Paul Cook, the Wolves favourite who will be seen on Championship touchlines in the coming months.

Monday, April 30: Time to absorb the late-season consequences and permutations…..Paul Cook is taking Wigan up from League One, Mark Venus has again teamed up with Tony Mowbray to do the same with Blackburn, Keith Curle has announced he is leaving Carlisle after three and a half years in charge there and Paul Lambert has it all to do to prevent Stoke slipping from the Premier League. An exciting weekend or two in store while the Wolves fans going to Sunderland can party again without anxiety.