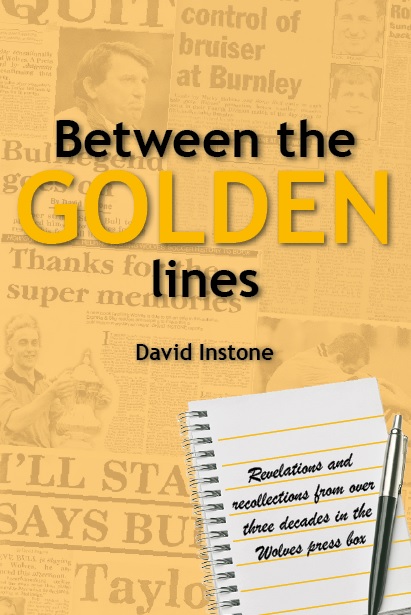 More than 400 Wolves supporters reserved copies in advance and the publishers have been working hard to clear that backlog before pushing on in search of new interest.

“We are very grateful to those people who ordered over the winter and who have been very patient while we have been working through the list,” the author said.

“It has been a substantial process but we are making good progress and have to say the task has been made much easier by the kind cooperation of our buyers.

“We do like to offer a sort of personal service with meeting customers where possible for a hand-over to avoid post and packing costs and just to say a thank-you for their interest. That all takes time.

“Many also like their copies signed and possibly personalised as a present, so we are more than happy to meet those requests. We have been involved in publishing for nearly 25 years, so we have a fair idea of what is appreciated and needed.

“We are always very grateful for the interest in anything we at Thomas Publications do. It is extremely flattering to have supporters eager to see your work.”

This latest £18.99 hard-back was planned to coincide with the 30th anniversary of the writer’s time in the Molineux press box, only to be put back a couple of years because of Steve Plant’s excellent They Wore the Shirt venture and then a family bereavement.

The secondary heading on the cover refers to ‘revelations and recollections’ from the reporting world around Wolves and the main theme of the 240 pages of text is very much that of telling the stories behind the stories.

“Journalists, especially ones who operate locally as I did for 16 years as the Express & Star’s Wolves man, see a lot that the paying supporters don’t, so there are plenty of tales in here that haven’t been told before,” Instone added.

“It isn’t in any way sensationalist but I can promise that the content is candid and forthright as well as affectionate – and the early feedback has been brilliant.

“It reaches a long way in disclosing the ways and personalities of so many leading Wolves figures and showing the different sides to their nature.

“There hasn’t been a book about the club, to my knowledge, like this before and it spans much more than just my time with the Star. I have done a vast amount of work with former players in the last decade and a half and have relished writing about all those meetings with Billy Wright, Bert Williams, Malcolm Finlayson and then the more recent generations.” 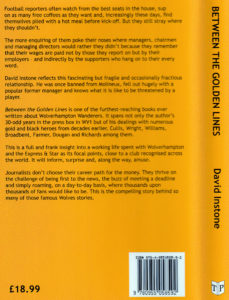 This being bus tour weekend, it is appropriate to point out that Between the Golden Lines includes write-ups of the author’s time with the squad on open-top vehicles in both 1988 and 1989.

He will be among the masses at ground level this time but happily recalls the laughter of being with Graham Turner’s title-winning lower-division players, once on a dismal Bank Holiday Monday and 12 months later in the Sunday sunshine when a hasty re-think on the route was needed.