Waiting For A Bus Never Was Such Fun!

Triumphant Tours Of The Past And Present

Having been among the masses for yesterday’s sweltering celebrations in Wolverhampton, we decided to look back at how such occasions played out in decades past….

Without doubt, they have changed over the years but the common denominator that is joy, relief and civic pride remain, whether we are talking about the 1940s or the present day. 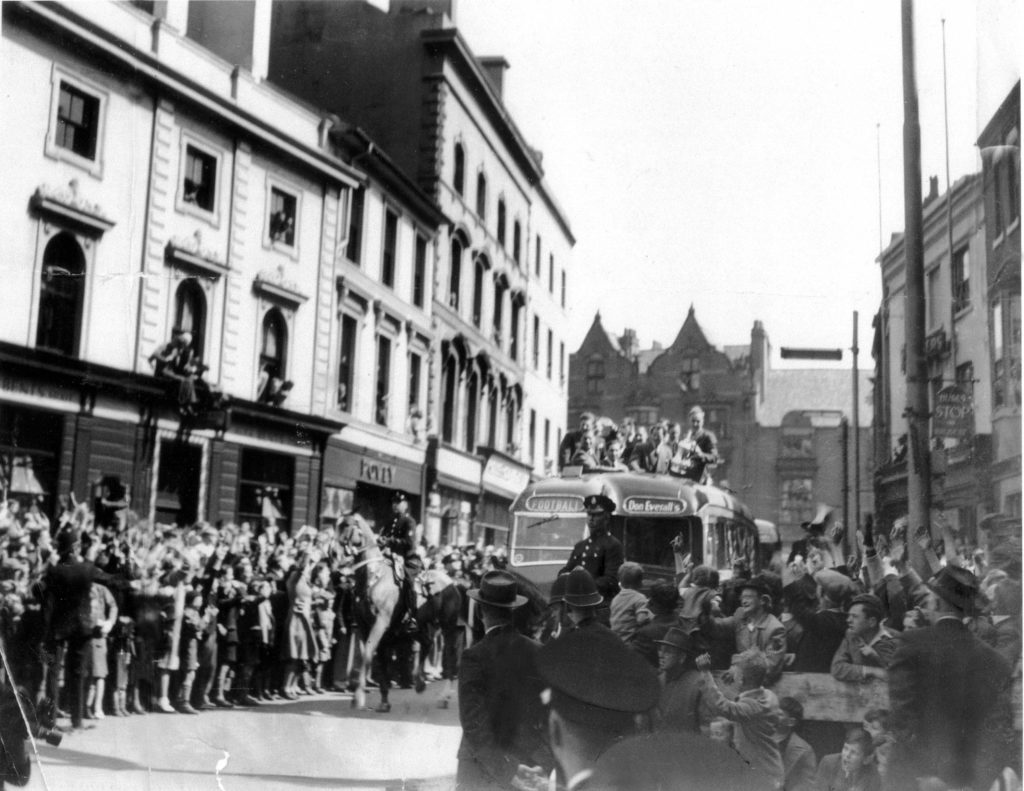 Back to a heroes’ welcome…Billy Wright and his 1949 team-mates.

The town, like everywhere else, knew how to put on a good street party in the late 1940s and Stan Cullis and his players were given a memorable welcome home after their Wembley win over Leicester and the subsequent banquet at London’s Café Royal. The vehicle carrying the players was as much charabanc as coach, with the words ‘Well Played, Wolves’ added down the side and disembarkation taking place at the Town Hall. There, Cullis stood alone on a balcony to say a few words, sincere but serious, and with none of Nuno’s extravagant gestures. The smiles came just after from Billy Wright who, in the true Corinthian spirit, included praise for ‘a gallant and sporting Leicester fight’ in his cheery address. John Timmins, who still lives in Tettenhall and was present yesterday, was four when his dad took him for his first Wolves experience to witness the occasion and said: “I swear Billy was looking straight down at me at one point in the crowd.”

Like 11 years earlier, the single-deck vehicle carrying the victorious team – always a Don Everall model, by the way – made its way from Wolverhampton railway station to a civic reception in the town centre. Photographers were perched precariously on ledges en route and police on horseback accompanied the coach to ensure good order. On the short journey, the players stood on a platform that elevated them through an enlarged skylight, with skipper Bill Slater and two-goal Wembley hero Norman Deeley well to the fore as the famous silverware was held aloft. The coach also had two replica FA Cups and a wolf on its front. Long-serving former Express & Star librarian Fran Cartwight joined Wolves Heroes representatives for yesterday’s celebrations and said: “I have been to a few of those but none has been more exciting than my first in 1960, when I was a teenager and I came along with friends.”

There still wasn’t a mobile phone in sight as Mike Bailey was given a huge roar as he emerged and stepped on to the pavement at the Town Hall after sleeping with the precious League Cup trophy at London’s Hilton Hotel the night following the pulsating victory over Manchester City. In Wolverhampton, the skipper appeared on the balcony with manager Bill McGarry, the players and management smartly dressed in suits clearly of their own choosing. Bailey, in keeping with the era, went for a very pronounced pinstripe. This, like the earlier homecomings, was a Sunday lunchtime event, with railings keeping the fans at a safe distance as at least four coaches inched through. WAGs aren’t just a 21st century breed then! Note that coaches rather than old-fashioned buses were still in vogue for this type of occasion. “There was none of the fuss that there was yesterday,” said former Molineux scout Les Green. “As I recall, we were just told the team would be at the town hall for some civic function at a certain time and a sizeable crowd of us, including me with our daughter on my shoulders, were there to greet them. I don’t recall a special drive past loads of fans in the town.”

How do you disperse a turn-out of tens of thousands in good time before they outstay their welcome? You show hour-long highlights of the previous day’s big match at 2.30pm on a Sunday afternoon! Wolves’ players had spent a night at the Mount Hotel after bringing down firm favourites Nottingham Forest at the twin towers, then they chugged past the well-wishers along the Tettenhall Road and in Chapel Ash to take the acclaim of the masses. Sponsorship had arrived, with the use of a double-decker bus bearing the name CIS Insurance. So had informality. Wolves’ players were dressed in matching black jumpers bearing a club badge and several, including skipper Emlyn Hughes and match winner Andy Gray, had adorned themselves in scarves thrown from fans below. It wasn’t a totally new experience to manager John Barnwell, who was interviewed en route by Nick Owen. As a boy growing up on Tyneside, he had been taken by his father to see Newcastle return home with the FA Cup in the 1950s. “I am tremendously impressed by this enormous turn-out, though,” he said.

May, 1988: Plotting a route back from the abyss

Was there ever a longer open-top bus tour than this? We started at the Three Tuns pub along the Stafford Road at Bushbury and carried on through the town centre all the way to Newbridge. I say ‘we’…..the Express & Star were sponsors this time and such was the run-down state of the club in the 1980s – and the absence of any corporate feel to Molineux – that we all squeezed on one bus; players in smart light grey suits, management and directors likewise, commercial staff, office girls and finally a sprinkling of media representatives joining them for a memorable ride. Considering the dismal Bank Holiday Monday weather and the fact that this was all about saluting success at the Football League basement (the winning of the Fourth Division and Sherpa Van Trophy), the numbers out on the streets, up lampposts and even on roofs were quite colossal.

The sun shone this time on a lower-key Sunday lunchtime lap of honour that nevertheless had Graham Turner enthusing over how many supporters had come out to salute his team of Third Division champions. Beacon Radio were engaged as sponsors and again there was a lengthy ‘run-up’, with the squad and other attendees boarding way out of town somewhere near Pendeford. Two notable absentees were Steve Bull and Andy Mutch, whose precise day of departure on an England B tour had been kept quiet so as not to hit the numbers. Even so, the pace was more leisurely than on similar occasions before or since, with thousands of fans following the bus down Darlington Street before it turned right for Molineux, a thin line of police proving sufficient as protection in the absence of railings. We stand corrected here if any of our readers have photographs to the contrary but Wolves’ players did things differently and more casually by opting for t-shirts and tracksuit bottoms.

May, 2003: A slow, ecstatic journey back from Cardiff

Wolves had suffered too many disappointments to tempt fate when they squared up to Neil Warnock’s Sheffield United in the Championship final 15 years ago, so secretary Richard Skirrow had the job of hastily booking two open-top buses after Dave Jones’s squad had got the job done in style at the Millennium Stadium. Wolverhampton and the club’s fan-base as a whole turned out in force, possibly like never before, to welcome the Premier League new-arrivals home and tour time was planned for late afternoon in Whitsun week. With the occasion blessed by perfect weather and the players and management casually dressed, two double-deckers inched their way from Molineux to the city centre, where fans assumed every possible vantage point – including atop telephone kiosks and even on the famous ‘Man on a Horse’ statue. Fans were then admitted to Molineux, where a full house witnessed a joyous lap of honour in the evening sunshine after Sir Jack Hayward and manager Dave Jones had walked out with the play-off final trophy. 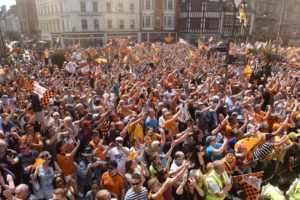 Not a bad image to remember yesterday by……photograph by Dave Bagnall, who was lucky enough to be on board with the players during the tour of the city.

Because of health and safety issues surrounding a planned bus tour, the city missed out on collective celebration when Mick McCarthy’s men went up convincingly in 2009. There wasn’t one in 2014, either, when the League One title was won by a mile, Jody Craddock’s testimonial shortly afterwards and the civic implications of that helping to put paid to the need for a specially adapted vehicle. But yesterday was some day and there was the new add-on of a party in the park. Here’s hoping the next one isn’t far away…..