Would You Believe It? 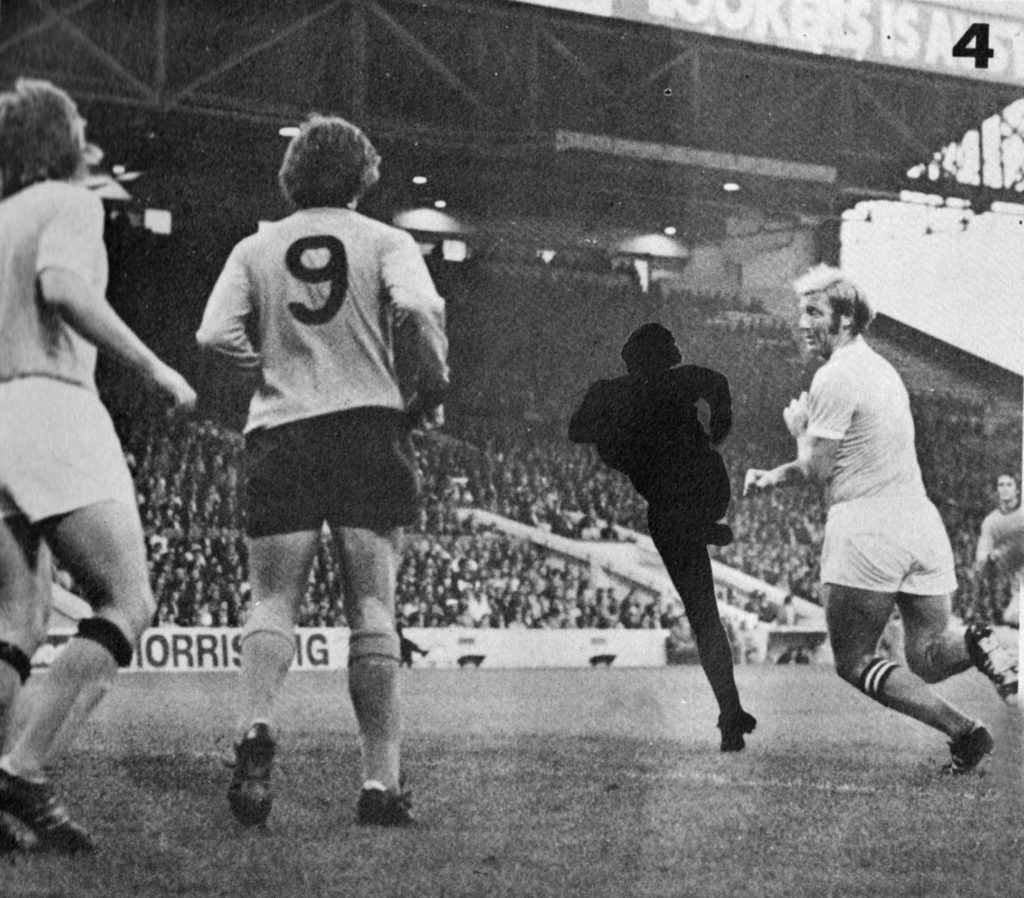 You will have to believe us for now: This IS John McAlle scoring. And you can almost hear John Richards and the distant Kenny Hibbitt yelling: ‘Scouse, you must be joking!’

Pictures of John McAlle goals are hard to come by. He scored only three times in his mammoth total of 508 Wolverhampton Wanderers first-team appearances.

And guess what? When we finally did find a pictorial record this week of one of his magic moments, he was utterly unrecognisable on it!

It is well known in Molineux folklore that McAlle’s rather spartan marksmanship was condensed into the space of three weeks in September, 1971 – he netted home and away against Academica Coimbra in the first round of the UEFA Cup and in a League Cup tie at Manchester City shortly before.

Through our friends at the Birmingham Post & Mail, we have previously accessed the photo of his close-range finish at home to the Portuguese side – but good luck with finding the one from the away leg!

Now we have sort of stumbled upon the goal he struck in the 4-3 second-round defeat at Maine Road. A bundle of old football annuals kindly passed to us a few days ago by Peterborough-based Wolves fan Mark Roberts included a 1973 Shoot Soccer Quiz publication that contained a certain black and white image on page seven.

In it, McAlle is seen striking home a left-foot shot that seemed likely to help see Wolves to victory in a tie in which they led 3-1 at one stage. The problem is that the proud scorer is blacked out in it as part of a guess-the-scorer competition that also shows goals by Tottenham (against Wolves), Leeds and Everton.

“It’s just my luck that I scored so rarely and, even when I did, that I was apparently not visible!” the 68-year-old said this afternoon.

“I don’t remember seeing or hearing about this photo before. I have seen the one at home to Academica and think that one came from a corner. I would have guessed my goal against City was at Molineux, so that shows I couldn’t tell you anything about it.

“And I haven’t a clue whether the one in Portugal was a shot or a header. I know that makes me sound like someone who scored loads and loads but that’s the way it is.”

Unless our memory fails us, the spectacular disallowed goal the veteran central defender scored in a derby win at home to Albion in November, 1970 did not result in great photographic acclaim for him either. Didn’t the pictures show only Baggies keeper Jim Cumbes flailing at the foot of his post? 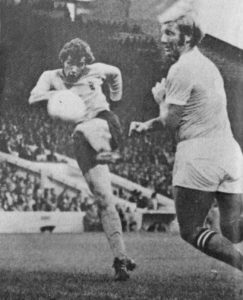 “I do recall that one,” the player added. “It was from 25 yards at least……I really smashed it. Wolves fans might find it hard to believe but the one goal I managed in my time at Derby was a special one as well.

“It was against Cambridge, I believe, and was from a very similar range.”

So McAlle, having netted at the very modest rate of one goal every 170 or so Wolves appearances, was relatively prolific at the Baseball Ground, where his output was about one in 60!

Wonder if our counterparts in the East Midlands can help us….