Big Day For A Little Lad

Tracking Down The Mascot Who Has Bailey As A Hero 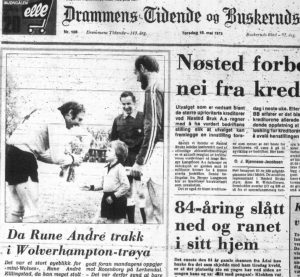 Stories come to us here at Wolves Heroes by all manner of means but one pathway we didn’t expect to open up was the one exiled Wolves fanatic Shay Griffiths created in Norway via a lad on whom Mike Bailey made quite an impression more than 40 years ago.

Readers might recall that we interviewed Walsall-born Shay at length in our www.wolvesheroes.com/2015/10/07/fans-day-of-pure-nostalgia/ article two and a half years ago. Now he has been responsible for bringing us another tale with a Scandinavian flavour.

Shay followed up the meetings we had with him on his 2015 visit back to this patch by pointing out he had made friends near his long-time home in Norway with Rune Andre Killingstad, whose dad faced Wolves on their trip to the country in 1975.

A look at the photo on the right shows a somewhat awe-struck youngster during the formalities that preceded the 1-0 victory Bill McGarry’s team chalked up over Mjondalen on a three-match that also included wins over Alesund and Odds Ballklubb.

We were thrilled to be put in touch with the same starry-eyed lad, who is now a strapping 47-year-old with two teenage boys of his own and fluent enough in English to share some memories of his big day.

“That is me with Mike Bailey in the photo,” he said. “My dad was a forward with Mjonadlen at the time and turned 67 on May 1.

“He spent that one season with the club, although he wasn’t a professional. He probably wishes I hadn’t stopped playing football when I was 15 and I started meeting girls….

“After being asked to be the mascot, I remember running out with some flowers to give to Mike Bailey and the referee gave me a little kick to keep me up to speed!

“Mike was lovely with me when shaking my hand and I have often wondered whether I should write to him because I was only five and a bit nervous in front of quite a big crowd.”

Rune, who shares a Christian name with his dad, lives in Hokksund, which is around five miles from Mjondalen and fewer than 35 miles east of Oslo. 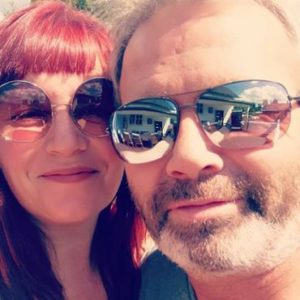 Rune in much more recent times.

He works as a carpenter and retains a soft spot for the club who presented him with a kit for his special day 43 years ago while admitting that his main affections on this side of the North Sea lie elsewhere.

“My main English team is Leeds,” he added. “I remember my uncle telling me what a great team they were when I was growing up, so that is who I look for mainly over there.

“I have been to Leeds a couple of times and to see them play at Tottenham and have never been in Wolverhampton, although I have happy memories of the time I saw them play.”