Hibby Hotfooting It Towards Launch Day 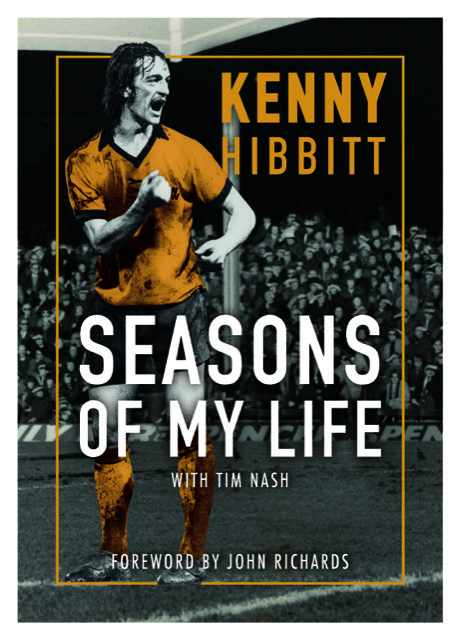 A stirring image that makes you want to peel back this front cover!

Another Wolves book will shortly be hitting the shelves, with Kenny Hibbitt’s autobiography likely to go on sale next month.

This long-awaited publication has been several years in the making, with the legendary midfielder engaging his long-time friend Chris Smith and then another former Express & Star man, Tim Nash, on ghost-writing duties.

We can already sense considerable demand among supporters for this life and career story – and why wouldn’t there be?

Only Derek Parkin has topped the 574 Wolves first-team appearances Hibbitt amassed after being picked up for a pittance in the final days of Ronnie Allen’s invaluable squad-building reign in the second half of the 1960s.

That the Yorkshireman also totalled 114 League and cup goals while at Molineux goes a step further in underlining why he is considered one of the finest English-born players to never win a senior cap.

Seasons Of My Life is a 258-page hard-back containing a personal account of the triumphs and turmoils of the author’s 16 years at Wolves, reference to how close he was to joining the backroom team at the club, the revelation that he also had to conquer acute nervousness before games, plus mention of the potentially career-threatening illness he battled through in his playing days.

Tragically, Hibbitt lost his older brother, Terry, at the time he himself was sacked as Walsall manager in 1994 and Tim Nash said today: “There are a lot of recollections that I had not previously heard in my 40 years as a Wolves supporter and reporter.”

The search for celebrity input was not a difficult one. John Richards penned the foreword while the back page contains a tribute from Robert Plant.

Some of Hibbitt’s long-time team-mates are also likely to be present at the launch of the book at Molineux later this close season.

Kenny Hibbitt – one of the ultimate Molineux heroes.

In eagerly anticipating the book detailing the 67-year-old’s half century in the game, we at Wolves Heroes can not claim to have been first in joining the publicity effort.

Hibbitt made the first public announcement of the project on the pitch at the Wolves v Derby game in April, since when he has also been interviewed by Sky Sports’ Johnny Phillips on stage at the Former Wolves Players Association dinner.