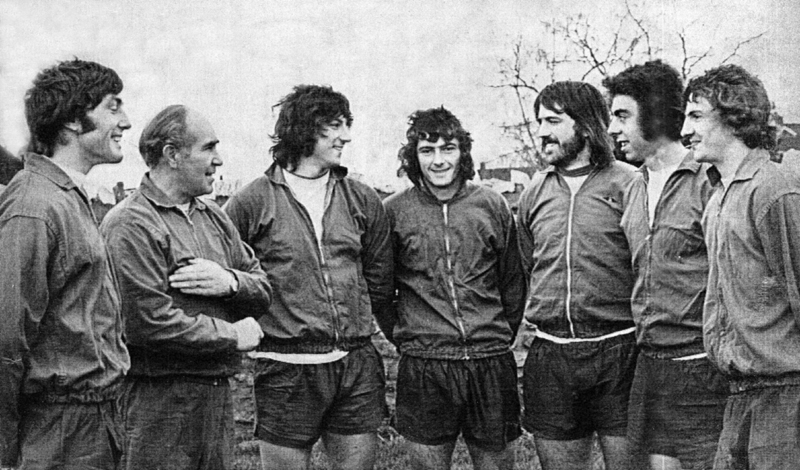 In exalted company….Barry Powell has (from left) John Richards, Peter Latchford, Trevor Francis, Bob Latchford, Geoff Palmer and of course Sir Alf Ramsey alongside him at an England under-23 get-together.

Barry Powell has told the story of how he came to be pursued by both England and Wales for an age-group game during his formative Molineux years – but ended up playing for neither in it!

The Warwickshire-born 1973 FA Cup semi-finalist and Wembley substitute from 12 months later is remembered as an international at different levels for the country of his birth but might easily have played for the one over the border as he qualified for them through his parents’ roots.

“It was when I was starting to show some promise for Wolves at 16 or 17 that I was selected for an England youth game against Scotland at Villa Park,” he said.

“As a substitute, I got on only for the last ten minutes or so and then had a call out of the blue from the Welsh manager some time after, asking me if I wanted to play in an under-23 game against England at Bristol City.

“A newspaper rang straightaway to ask my reaction to that call and I got the biggest bollocking of my life when Bill McGarry read what I had said to the reporter.

“The paper said I had chosen to play for Wales, where my mom and dad were born, but I was pulled out of the Welsh team two or three days later and named in the England squad instead.

“Sir Alf Ramsey had watched me in the meantime, against Newcastle, I think, and then I played in matches at Norwich and Sheffield United soon after the under-23 match. It was an unusual case but I wasn’t disappointed in any way…….it was just nice to be in the England squad and I had initially chosen to play for them if I ever had the chance.”

Powell, whose Wolves debut came in a draw at Crystal Palace only four weeks before the Cup semi-final defeat against Leeds at Maine Road, went on to win four under-23 caps.

Two of those were against Scotland – at Newcastle and Aberdeen – one against Czechoslovakia at Palace and the other against Portugal at Benfica’s legendary home.

“There were a lot of good midfielders around at the time and I had Alan Hudson, Gerry Francis and Steve Perryman as team-mates and competition,” he added. “Peter Taylor was another who was very prominent.

“We won each game I played in and scored three in most of them, which was nice. I knew when I had played well and when I hadn’t and recall feeling very disappointed when Gordon Banks and George Eastham left me out of the game in Lisbon.

“Two or three minutes later, though, there were some footsteps in the corridor and the message came that they had picked the other Powell (Steve of Derby) by mistake and I was on the bench after all.

“Mick Buckley of Everton then received a gash to his eye after only three minutes, so I played almost the full match as we won 3-2.”

Powell had Geoff Palmer, John Richards and future Wolves men Alan Dodd and Ray Hankin as under-23 colleagues at different times and might have been expected to make the step up to the ultimate level. 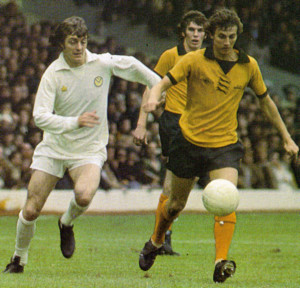 But he continued: “I wasn’t named again even for the under-23s, although I was selected by Don Revie in an 84-man squad he thought would cover his tenure in the job. I was also watched by Ron Greenwood in a Coventry v Liverpool game.

“My dad, Ivor, who had been on Villa’s books and moved up to Warwickshire from South Wales to work in the motor trade after a bad tandem accident ended his hopes of a professional career, was hard to please but reckoned I had done well when Ron was watching me.

“I made a goal and thought I had done all right but the call I wanted never came.”