A Ceremony To Be Savoured 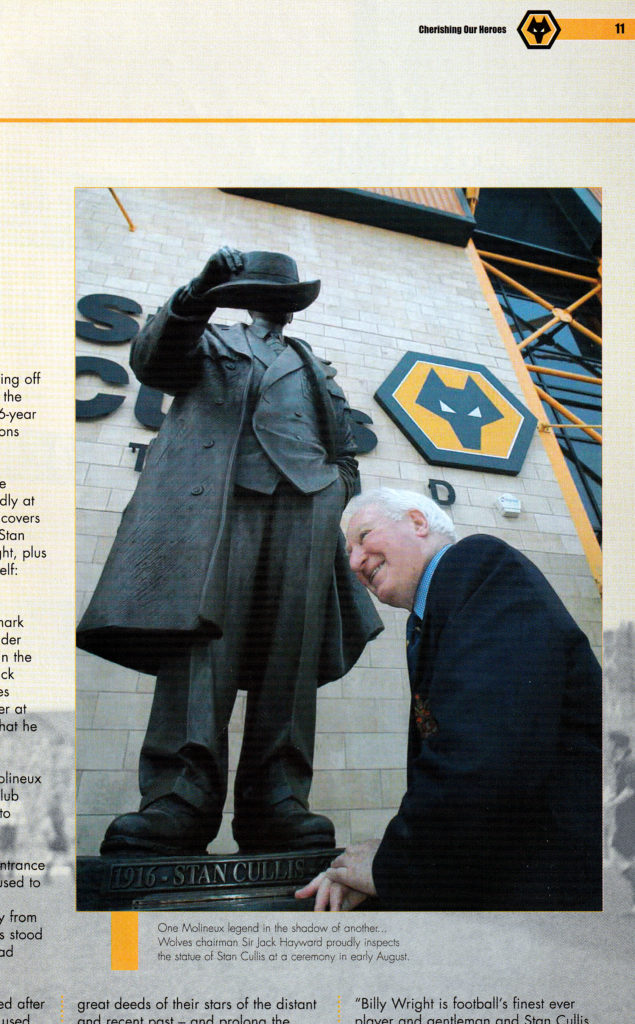 How the Wolves Official Magazine a decade and a half ago captured one Molineux hero honouring another.

One important date is being marked by the keenly-awaited unveiling of the Sir Jack Hayward statue next month – namely, what would have been the great benefactor’s 95th birthday.

Another would have been celebrated had the wraps been coming off today, the reason being that this is the 15th anniversary of the game etched in our memories partly because of the famous thumbs-up sign that gave sculptor James Butler the perfect image to create.

May 26, 2003 was the day on which Wolves reached the Premier League for the first time by blowing Neil Warnock’s Sheffield United away in an incredible first half at the Millenium Stadium.

The club lasted only one season among the elite then and, at something of a struggle, spent three years in the top grade when they went back up in 2009. But even a nervous watcher like Sir Jack, whose relieved, ecstatic gesture to the gold and black masses was captured by the TV cameras in Cardiff, would have been excited by the more optimistic outlook now.

The June 14 unveiling day also coincides with the publication of the Premier League fixtures, so we can safely assume there will be a decent turn-out when the structure takes its place outside the stadium in the area between the Steve Bull Stand and the behind-the-goal one bearing Sir Jack’s name.

Experienced Molineux attendees will remember the sunny midweek lunchtime on which the Billy Wright statue was revealed to the public for the first time in September, 1996.

And it was in the hours before a pre-Premier friendly against Portuguese visitors Boavista in 2003 that Stan Cullis, trilby in hand, was immortalised in one and a quarter tons of brass and clay behind what we used to know as the North Bank.

The Hayward equivalent reminds us how well Wolves celebrate their heroes, with the same three men also each having a stand named after them.

Not many clubs go to such lengths to cherish their greats but not many have a man like Sir Jack who not only had deep enough pockets but also the generosity of spirit to finance the ultimate tribute to figures who were very much his own heroes.

The Bank Holiday weekend brings a double anniversary of final joy in Wolves’ history, with this Monday marking 30 years since the club beat Burnley to win the Sherpa Van Trophy at Wembley.

And one other thing while we are on the subject of statues….David Instone’s newly-published Between The Golden Lines book contains a surprise revelation of how Sir Jack planned more than a decade ago to have another statue built at the ground.

No names at this stage on this website but the plan was laid to rest and no publicity was ever given to the surprise idea, until now.