Caswell Opens Up On His Fleeting Molineux Stay 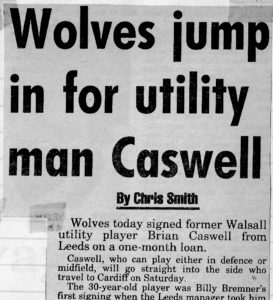 How most Wolves fans learned of arrival day.

What in some ways was viewed as lift-off day in the Wolverhampton Wanderers renaissance proved to be the end of Brian Caswell’s brief Molineux story.

A 2-0 Fourth Division victory at Cardiff in the early months of Graham Turner’s management underlined the coming of Steve Bull as a major force and the emergence of Andy Thompson as a penalty-taker of some note. January 24, 1987 also happened to be the day on which Wayne Hennessey was born.

For Caswell, a Wednesbury-born Walsall veteran, the memories from Ninian Park are much more painful.

“I had signed on loan for Wolves in the week and was looking to play some games because I was on my way back, as a Leeds player, from a cartilage injury,” he recalled.

“My parent club wanted me to get some match practice but I probably saw it as a chance to make an impression and earn a transfer back this way because we didn’t move to Yorkshire and I was finding the travelling a bit of a drag.

“For 89 and a half minutes at Cardiff, it went well. I played in midfield and was told to do what I do – tackle and win the ball.

“We were just seeing the game out when Alan Curtis jinked past Ally Robertson and I slid across to touch the ball back to Mark Kendall and stop him getting in a shot.

“When I got up, I couldn’t run and felt like my knee had exploded. I walked back to the centre circle, the final whistle went and I hobbled off.

“I had some treatment in the dressing room that carried on back at Molineux for a day or two, then I returned to Leeds to see the surgeon in Harrogate. He said straightaway I had snapped my cruciate and that I wouldn’t walk in ten years’ time if I didn’t have the operation. So there wasn’t much choice!”

Caswell, already nearly 31 and chiefly remembered as a full-back, had played the last match of his professional career. His planned month at Molineux had effectively been curtailed inside a week.

“I can laugh about being one of the few players in Wolves’ history to have a 100 per cent win record but it was very disappointing,” he adds.

“Everything had gone well in that few days and I was enjoying the game. I knew Garry Pendrey from working with him and Alan Buckley at Walsall and the chief scout there for years was Ron Jukes, who was now in the same role at Molineux. 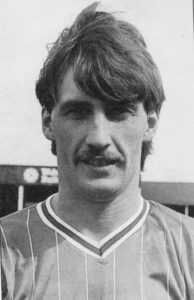 Photos of him in a Wolves kit are rare indeed…..

“There were other reasons to sort of feel at home. I had been with Roger Eli at Leeds and knew Ally Robertson pretty well because we lived quite close together in Walsall and we often had pre-season friendlies against Albion as well as them providing the opponents at my testimonial game.

“I felt very comfortable playing in front of him and remember Bully going through twice in the first half-hour at Cardiff. His finishing wasn’t the best then but Ally said: ‘Don’t worry….he’ll score.’ He did later that afternoon – and then a few hundred more!

“During my schoolboy career, which included a game for the West Bromwich area against Brierley Hill and Dudley in which Sam Allardyce and myself were on opposite sides, I had actually done some training at Wolves.

“I was about 11 and recall loads of kids being in that gym in the big Social Club next to the ground. I can’t remember who took the sessions but a lad called Mick Bradbury was around and banging on lots of goals. I opted for Walsall anyway in the end because that seemed more convenient.”

The 62-year-old played well over 450 competitive matches for the Saddlers, including both legs of the Milk Cup semi-final against Liverpool in 1983-84, and, before joining Billy Bremner’s Leeds, was part of the Doncaster side who won 2-1 in a Third Division game at Molineux.

In a long coaching and scouting career that took him to Stoke, Birmingham and Shrewsbury, Caswell also served as no 2 to Wayne Clarke at Telford and felt the former striker could have succeeded as a manager. “He just wasn’t one to push himself,” he said.