A Sight To Inspire Us All 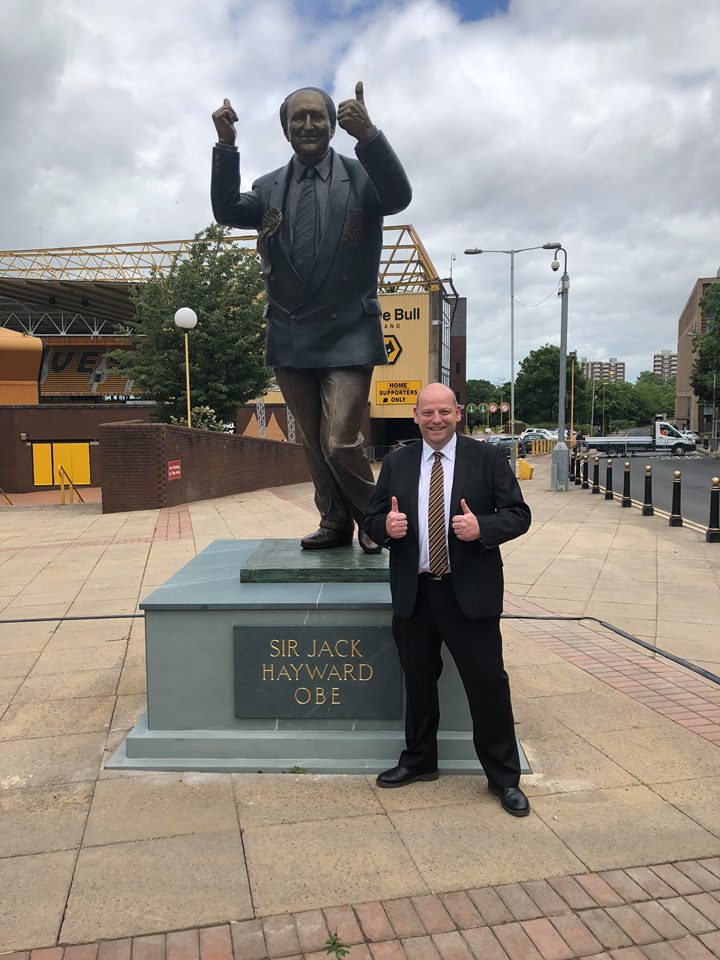 Steve Galloway, a major player in the money-raising effort, pictured today alongside the newest addition to the Wolverhampton landscape.

For the best part of a decade, he literally travelled the length of the country in Wolves’ cause, his heart undeniably on his sleeve.

Today, with his notes and thinning hair blowing in the wind, Jonathan Hayward addressed a gathering of several hundred fans outside Molineux and spoke proudly of his family’s enduring links with the club and Wolverhampton. Well, not many can say their dad has had a statue unveiled in his memory.

It is 20 years this close season since Jonathan severed many of his connections with Wolves but he is increasingly being welcomed back into the fold.

Since his 60th birthday bash included an invitation for Richard Skirrow to join him on one of the two corporate tables he bought for last summer’s England v Australia Champions Trophy match at Edgbaston, he has been seen more and more at Wolves games.

He estimates he saw 12 last season, not only a healthy sprinkling at the stadium he watched his father rebuild a quarter of a century ago but also, striking out from near Bath – home these days is not up in the border country – he made the relatively short trips to Bristol City and Cardiff and, thanks to a close friend at Craven Cottage, Fulham.

“I had been thinking of going to some cricket this summer but the date I had in mind coincides with the first match of the Premier League season and I plan to be at that instead,” Hayward said this afternoon. Roll on the second weekend of August, he might have added.

A couple of hours before the wraps came off Molineux’s third statue – how many clubs can boast that many? – we learned that a visit from Everton would kick off life back in the top flight.

This morning, the Reverend David Wright reminded us in his typically eloquent opening remarks how proud Sir Jack would have been at the emphatic and stylish Championship title triumph that made the publishing of the fixtures so eagerly anticipated in these parts.

Borrowing the ‘Nuno had a dream’ catchphrase, the man who conducted the benefactor’s 90-minute funeral service just up the slope at St Peter’s in 2015, said: “Sir Jack also had a dream……to rebuild a great football club. Wolves had been in real trouble when he took over in 1990. While statues stay still, this is a club now on the move.”

Among the well-wishers on this happy occasion in addition to the four members of Jonathan’s immediate family were Skirrow, latter-day directors Derek Harrington and John Harris plus John Richards and the man who succeeded him in heading up the day-to-day running of the club, Jez Moxey. Alan Cotterill, the genial architect of Sir Jack’s Golden Palace, was there and how lovely it would have been for Rachael Heyhoe Flint to have been also.

‘One of a kind’ and ‘the man who picked up the pieces of a broken club’ were among the phrases the current managing director used. The choice to call him ‘remarkable, much-loved, unique and wonderful’ could have been his or anyone else’s since there was not a person present who didn’t agree with the sentiment.

Hayward Snr, who would have turned 95 today, always said he would come back and haunt us all if anyone ever tried to rename the stadium in his memory. Well, he now has a road, a stand and, just to the side of it near where fans emerge from the subway, he stands in bronze in his most famous pose in this latest work from the outstanding James Butler. 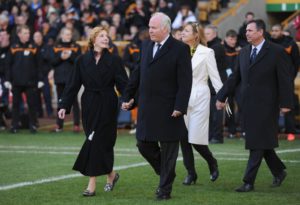 A Birmingham Mail photo showing Jonathan Hayward after the passing-away of his father early in 2015.

Jonathan thanked Steve Morgan for kick-starting the project, Jeff Shi and others at Fosun for seeing it through and Will Clowes in the Molineux corridors of power for the hands-on supervising of the enterprise.

“Thank-you all for the love and support you have always shown my father,” he concluded. “Perhaps in the future, when you pass by, you can give HIM the thumbs-up.”