Memories of Eccentric Forward Who Had A Rich Goal-Scoring Knack 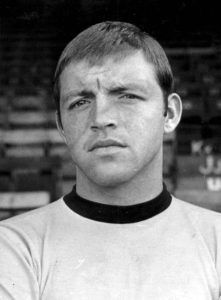 He didn’t win a full England cap – a lot of very good players didn’t back then.

But Ernie Hunt accumulated three under-23 appearances and claimed a strange link to the most famous 11 in this country’s football history. He was born Roger Hunt.

And those who knew him wouldn’t doubt for one moment that he probably wasn’t shy about milking that curious connection.

The mad-cap forward, who died this week aged 75, had a prank or story for every occasion. Even the day of his first international call-up was a strange one.

Hunt was helping paint a friend’s house when his Swindon boss Bert Head pulled up on the drive to tell him he was required for a trip to Rumania in June, 1963.

It was the player’s first time out of England but there were some very familiar names to ease the nerves, including one who would be on the team-sheet for the dismantling of West Germany at Wembley three summers later, George Cohen.

Another, Ian Callaghan, figured early in the 1966 finals while Peter Bonetti – later to become part of Wolves’ coaching staff under Graham Taylor – was also in Alf Ramsey’s final 22. Bobby Thomson and Alan Hinton, both then at Molineux, were each winning their second under-23 cap against the young Rumanians.

It’s unlikely they forgot Ernie in a hurry. A wig and lipstick never seemed to be far away when he was around – did he carry a suitcase full of extravagant accessories? Nor was a hug and a smacker on a male or female cheek.

Brian Roberts had two years as a Wolves full-back in the early 1990s but, as a young pro, knew Hunt at Coventry. He was impressed when Ernie knocked on the manager’s door on his behalf when he was taking the boss and his assistant their drinks and breakfast one morning; less so when his shorts were suddenly pulled down just before the tray was handed over.

Come the time of his crowd-pleasing ways at Highfield Road, further under-23 caps had been won against Czechoslovakia and Turkey, both of them arriving almost three years after his international debut.

Hunt had been a disbelieving onlooker in the stand at Southampton when Wolves were humiliated there 9-3 early in the 1965-66 season within hours of him signing from Swindon for £40,000.

He was back at The Dell barely two months later and this time his memories were much happier as he lined up in a 2-1 under-23 win over Yugoslavia. Look at the names and it’s no surprise England got over the line…..Stepney, Lawler, Thomson again, Hollins, Tommy Smith, George Armstrong, Rogers and goalscorers Chivers and Mick Jones among them.

With an eye on the gate, FA and Molineux officials were disappointed that Ernie was over-age by the time Wolves hosted the 8-0 slaughter of Wales by an Allan Clarke-inspired England in the months that followed the nation’s finest football hour.

But he had by then squeezed in a third cap, in a 2-0 victory against Turkey at Blackburn the previous spring, when Alan Birchenall, Mike Summerbee and Martin Peters were among those who appeared as new team-mates. Summerbee, like Bobby Woodruff, who preceded Hunt to Molineux, had also been colleagues of his at Swindon.

Mike Bailey shared a room, if not a pitch, with Hunt at under-23 level and said in a 2010 interview on this site with John Richards: “He was a great pal. Not only was he such a character in the dressing room but he could play.

“I got to know him very well. We had a real understanding on the pitch. I could always find him with the ball. I knew just where he’d be.

“At free-kicks, he just kept an eye open, gave a little move and he knew what was going to come.” 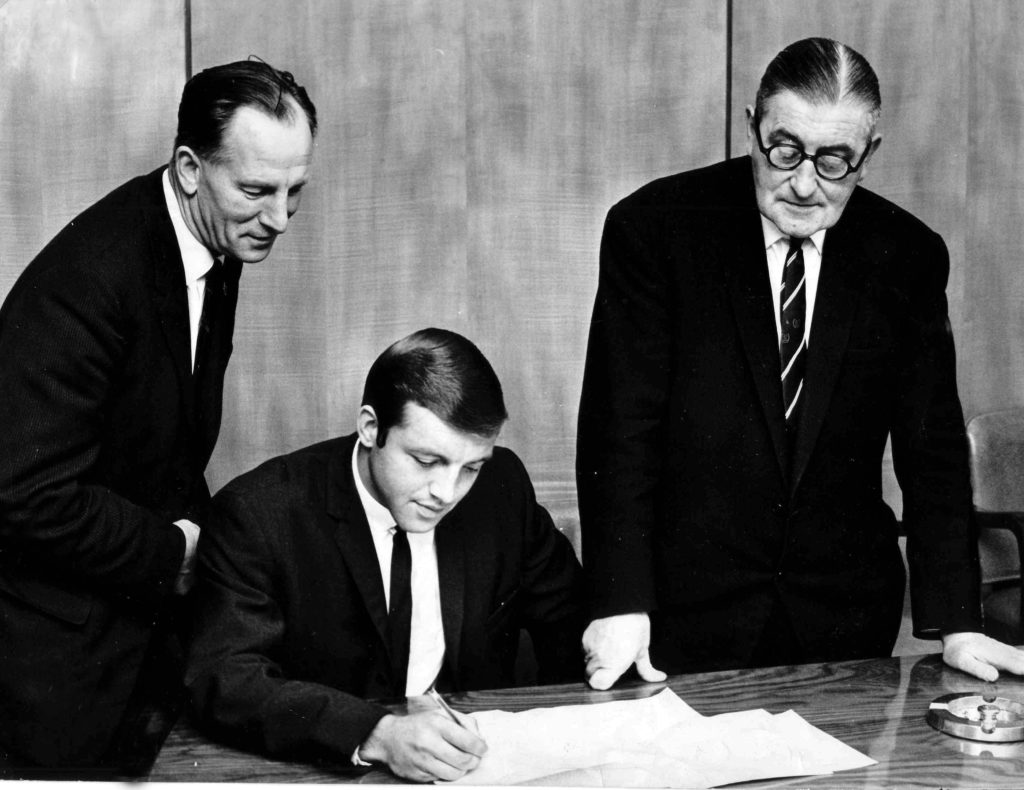 Signing at Molineux in September, 1965 in the company of Andy Beattie (left) and Jack Howley.

John Holsgrove was a fellow lodger in the Wolverhampton digs Ernie was initially allocated with Joe Gardiner’s mother and they used to while away their afternoons and evenings with a song and a laugh on the guitar and harmonica respectively. With Ronnie Allen’s side winning 3-0 in each of their first four matches with the chunky Swindon-born forward in the line-up, it was a case of sweet music on and off the pitch.

Hunt scored 12 Wolves goals that season and followed it with a best-in-the-club 21 in the promotion-winning 1966-67 Second Division campaign, including a hat-trick in a big win at Northampton.

Success followed in the United States that summer and with two goals in his first six games in the top flight, it was a surprise when Wolves shipped him out in the early autumn of 1967, although the fact Everton had dangled a double-your-money £80,000 cheque under Molineux noses was no doubt a strong contributory factor.

Hunt has been quoted in the West Country in the past as saying he knew he was close to a call-up to the senior England side – and that a move to one of the country’s glamour clubs would probably further that particular ambition.

Goodison life was much less fulfilling, though, partly because Harry Catterick played him on the wing, but Ernie clicked big time at Coventry, where he achieved a strike ratio in keeping with the 88 goals he had managed in 237 Swindon appearances after becoming, at 16 years and 182 days in September, 1959, the Wiltshire club’s youngest ever debutant.

By far the most famous of his 50 or so Sky Blues goals was the donkey-kick volley he manufactured with Willie Carr against his former club Everton in front of the Match of the Day cameras. The routine was soon outlawed but Hunt, as at Wolves, was pure box office; always capable of the unexpected.

That last comment stretches to his extra-curricular activities as well because Ernie – so known to differentiate him from the Liverpool and England striker – was colourful in every sense.

He partnered Bailey in running the Savoury Duck restaurant in Birmingham, had a sports shop in Coventry, kept the Full Pitcher pub in Ledbury for ten years, did a window cleaning round until falling off his ladder and breaking eight ribs, wrote an autobiography entitled Joker In The Pack and saw his weight balloon to 17st before returning to a manageable 12st.

Phil Parkes recalls how Ernie would ring him in a put-on voice and David Burnside couldn’t believe it when I turned up for a meeting with him in Gloucester once and described the menagerie I had just left behind at the Hunt household, complete with dogs, cats, budgies and even rats. Actually, he remembered his team-mate well enough, so he did believe me!

Thanks in no small part to Richard Green of the Wolves Former Players Association, the Hunt and Carr families have been reconnected in recent months, even if Ernie wasn’t able to take advantage of the link from the care home in which he was accommodated.

But we were delighted to see the man himself at the funeral of his good pal, Dave Wagstaffe, in 2013. 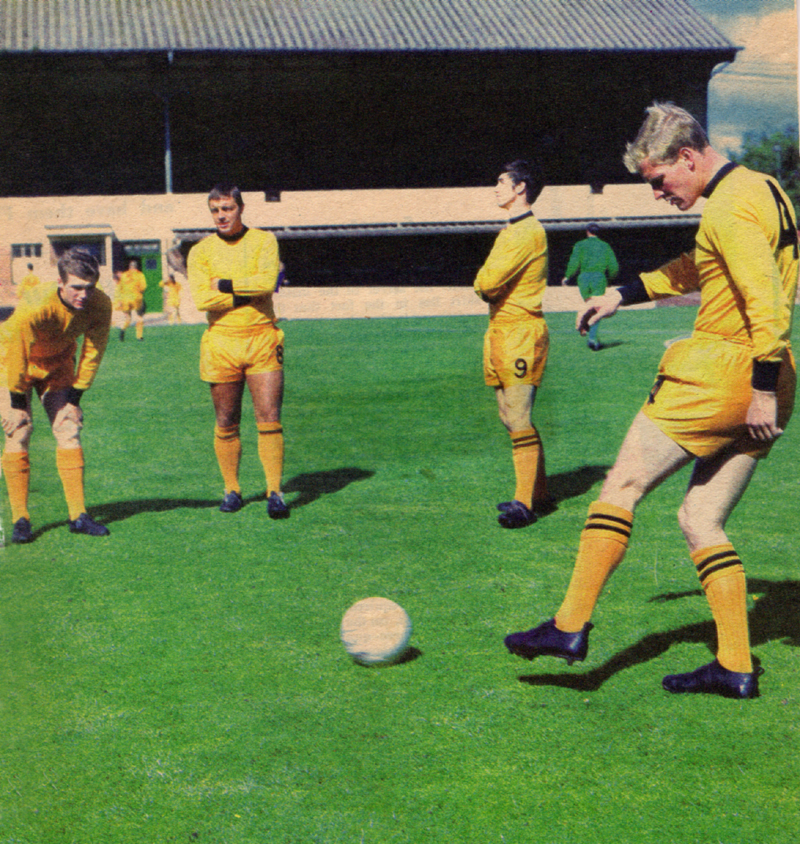 Relaxation at Molineux before training in 1966 with (from left) Terry Wharton, Hugh McIlmoyle and Ron Flowers.

We leave the last word to Holsgrove, whose own Wolves baptism was that same quartet of consecutive 3-0 successes in 1965 against Bury, Norwich, Leyton Orient and Middlesbrough.

Clive Corbett’s ‘Those Were The Days’ book of more than a decade ago quoted the Hank Marvin of the Molineux defence as saying: “If ever a man’s gone through life living the way he wants, it’s Ernie. I’m not sure it’s the right thing for his health but he was always going to live his life and when the light goes out, the light goes out. A great man.”