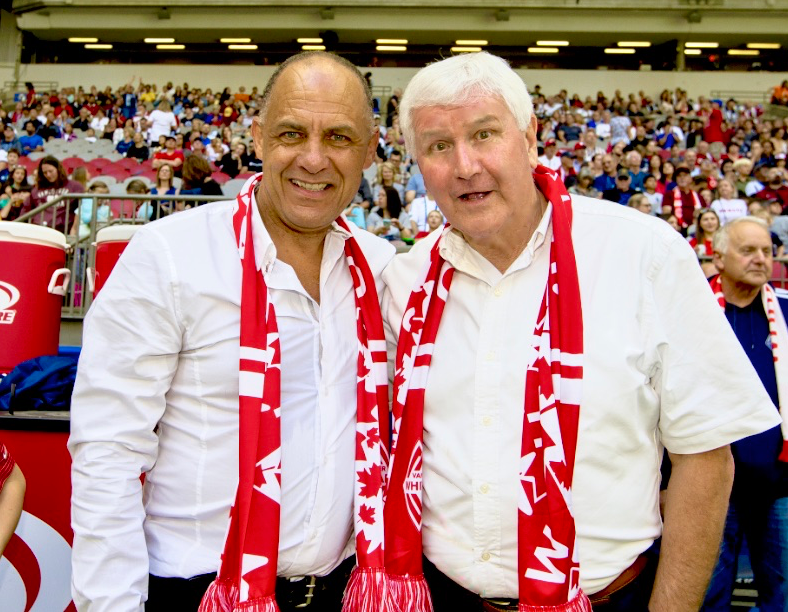 A momentous day in British Columbia has this week linked a Wolves midfielder from this century to a favourite from the last one – with the World Cup as the central theme.

Fittingly, the nostalgic reunion took place on Canada Day and featured Les Wilson, Tony Waiters and around a dozen of their players from what remains the country’s one and only appearance in the finals of the tournament.

Under the duo, Canada made history by winning the 40-team Concacaf Championships 33 years ago and securing a place in Mexico the following summer.

The minnows did not make it out of Group C in the competition itself, losing to European champions France (1-0), Hungary (2-0) and the Soviet Union (2-0), but were the talk of the region for some months after booking their ticket.

“We beat Honduras 2-1 to reach Mexico and will never forget the elation of the final whistle going,” Wilson said. “We didn’t even have a professional domestic league at that time – we really were underdogs.

“I have a picture of Tony, myself and other coaching staff members celebrating at the end of that game, which we staged in St John. As we found out when we won in Honduras earlier in the group programme, they are used to playing in much higher temperatures than we are, so we figured that going to Newfoundland for our home match would help us.

“It was a wonderful achievement and a fabulous experience to go to the World Cup finals. The present tournament is edge-of-the-seat stuff all the way and we are so proud to have been part of it all in Mexico.”

George Pakos scored home and away against Honduras and led the March to the Match – the walk from Victory Square in Vancouver to the Whitecaps’ BC Place stadium on Sunday.

Wilson, Waiters, assistant coach Alan Errington, defender Bob Lenarduzzi and Carl Valentine, a forward who also saw service with Oldham and Albion, were among those saluted by the big-day crowd.

“It was a warm and respectful reception”, added Wilson of his return to the club where he achieved fame as a player, manager and administrator after his 114-game career at Wolves in the 1960s and early 1970s. 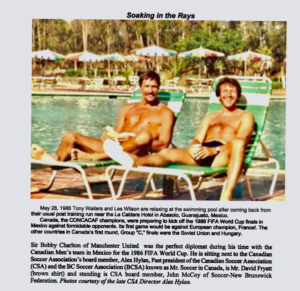 Les Wilson and Tony Waiters cool off after a training run in Mexico in 1986.

The Whitecaps have been managed since December, 2013 by Carl Robinson, who played approaching 200 first-team Wolves matches as well as winning 52 senior Welsh caps.

“Getting together again was a real trip down Memory Lane,” Les told us. “We had more success as minnows in 2000, when Canada defeated the Mexican World Cup team and the Columbian World Cup Team en route to becoming Concacaf double gold medal champions.

“The Concacaf region is made up of some 40 countries – in North America, Central America and the Caribbean and we also had to get past Trinidad and Tobago, with Dwight Yorke and company.”