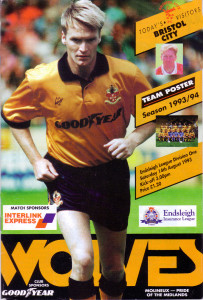 The early 1990s Geoff Thomas – when we had such high hopes for his Wolves career.

His Wolves stay was truly blighted by misfortune and his England career was relatively brief, albeit successful.

Geoff Thomas, who has the impressive Three Lions record of nine caps, no defeats, will this teatime share with viewers his confidence that Gareth Southgate’s side will prove a step too far for Croatia.

The midfielder has been self-deprecating about his days in international football. Maybe he has been dining out a little too much on that infamous and horribly miscued shot against France at Wembley in 1992!

But he has a certain inside track on the national boss, having played alongside him in a Crystal Palace side he skippered in the early 1990s, and backs him to turn tonight’s World Cup semi-final into further cause for celebration within these shores.

Thomas, who appears on our screens on BBC Midlands Today not long before the big kick-off in Moscow, didn’t play tournament football for England, at least not in any finals.

It could well have been different, though, because his experience at that level was condensed into a shortish period during the reign of Graham Taylor, who then became his Wolves boss in the spring of 1994.

The midfielder’s debut came in a 1-0 European Championships qualifying victory over Turkey in Izmir in 1991 and he also faced Poland in a campaign that led successfully to a place in Sweden in the summer of 1992.

Other than a friendly win at home to the USSR, all of Thomas’s other caps were against Southern Hemisphere opposition – Argentina in a home friendly and Australia, Malaysia and New Zealand twice on a tour of the Far East and Down Under.

It was an appearance rate that encouraged thoughts of him being on the plane to Scandinavia for the Euro finals in 1992. 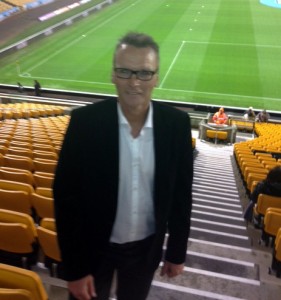 Back at the stadium in 2012 on a corporate visit.

Alas, in the months following that squandered one-on-one chance against the French in another friendly at the twin towers, the opportunity didn’t arise.

The 2-0 victory, which furthered Alan Shearer’s emergence in the side, proved to be the Palace man’s final cap, with Southgate winning the first of his 57 under the management of Terry Venables in December, 1995.