Evans Flies To Aid Of Star He Helped Shape 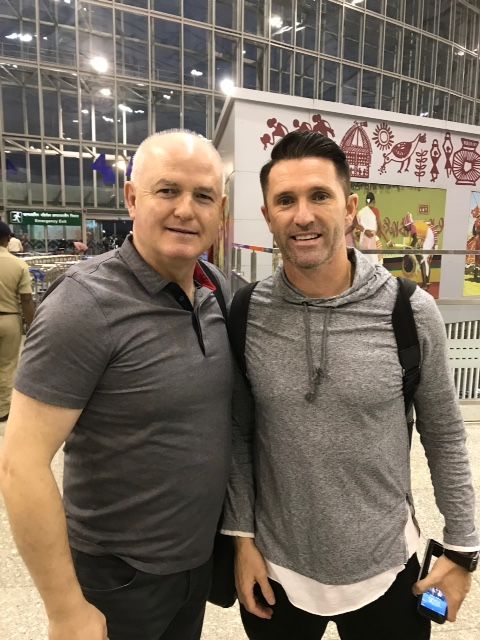 More than 20 years ago, Chris Evans sat next to Robbie Keane at Molineux as the precocious teenager put pen to paper on the contract he used to propel himself on the road to fame and fortune.

Now comes the intriguing possibility that the two might work side by side in the technical area in future after linking up for several weeks on Indian Super League duty.

The professional reunion this spring of two men who had stayed in close touch over the intervening decades arose after Keane’s playing contract with AT Kolkata suddenly took on managerial responsibilities as well.

The former Wolves forward was taken to the sub-continent by his one-time Tottenham team-mate Teddy Sheringham as the club’s marquee signing of 2017 – and installed as captain.

With the side’s fortunes flagging after title successes in two of the previous few years, though, Sheringham, who had former Wolves midfielder Kevin Keen working at his side, was replaced after only six months. Technical director Ashley Westwood stepped in as his replacement, only for another change to be deemed necessary close to the end of the season.

“Robbie was made player-manager and rang at the first opportunity to ask if I would go out as his assistant,” said Evans. “This was his first time in a coaching position and he had his hands full as he was still playing.

“I have always thought the world of him and wanted to do anything I could to help. He and I are still very close and he gave me instructions on the system he wanted to play and how he wanted training done. That meant I did much of the managing from the technical area and left him free to concentrate on playing and keeping fit.”

Keane, as is his way, ended the season with a flurry of goals, including the decider on his managerial debut in the last-day win over Avram Grant’s Northeast United. With those points, the duo lifted the club – formerly named Atletico de Kolkata because of an ownership link-up with Atletico Madrid – off the foot of the table and to a final placing of ninth.

They built on the success with a 4-1 win over Chennai City in the end-of-season Super Cup but then lost 3-1 to Goa and firmer plans have since been put in place with the recruitment of Steve Coppell and Wally Downs for next season, with former Wolves man Bobby Mimms replacing Jussi Jaaskelainen as goalkeeper coach.

Other familiar names around the Kolkata camp in recent months have been Martin Paterson, Ryan Taylor, Carl Baker and Iain Hume.

“It is an amazing place,” said long-time Wolves academy chief Evans, who took a photograph of the 85,000-capacity Salt Lake Stadium from the window of the plane he arrived on. “The population is 17million for a start.

“All away games involve flights and the heat is something else, so one of the things we introduced was training at 5pm rather than at 10.30 because the sessions would previously spill over into the midday sun.

“One of the problems was that, although Kolkata had been champions quite recently, most of those players had moved on and others had come in.”

Even at 37, Keane is likely to play on before embarking on the new career Evans believes he will succeed in.

“People like him and with his personality and the respect players have for him, he will do well,” he added. “We had very little time in charge but he lifted the whole place. His sessions were bright and crisp and he put smiles on faces.

“He has picked up good habits from the many top managers he has worked with and showed during his five years with LA Galaxy that he is prepared to step out of the environment he knows. 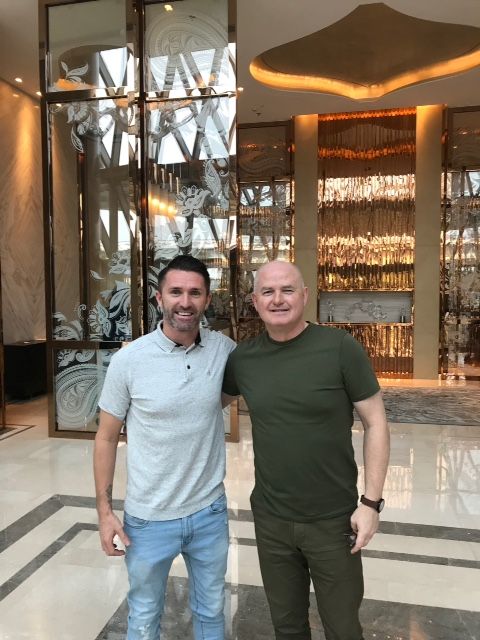 Delighted to link up again so far from home…..

“He will have a good career in management, I have no doubt. He has done his B and A licences and is now doing his pro licence. When he can, he will visit a few of the bigger clubs around the world to see what he can learn.

“His total of 146 Republic of Ireland caps, with 68 goals, is phenomenal and he has a record of one goal every two and a bit games from his club appearances as well. Those figures have got him known globally.

“So much so that he is a FIFA and UEFA ambassador and he and I have just been out to China together as part of the World Cup celebrations. Huge companies from over there were among the tournament’s sponsors and he was appearing at events with other legends such as Paul Scholes, Michael Owen, Robbie Fowler, Steve McManaman and Rivaldo.

Keane, who scored for a World XI in a game against England in June that raised £5.5m for Unicef, noted the re-emergence in India of a man who once tried to sign him.

John Gregory, having attempted to take him to Villa from Wolves in 1999 before Coventry eventually swooped for £6m, has extended his contract with Chennaiyin after leading them to their second Super League title.