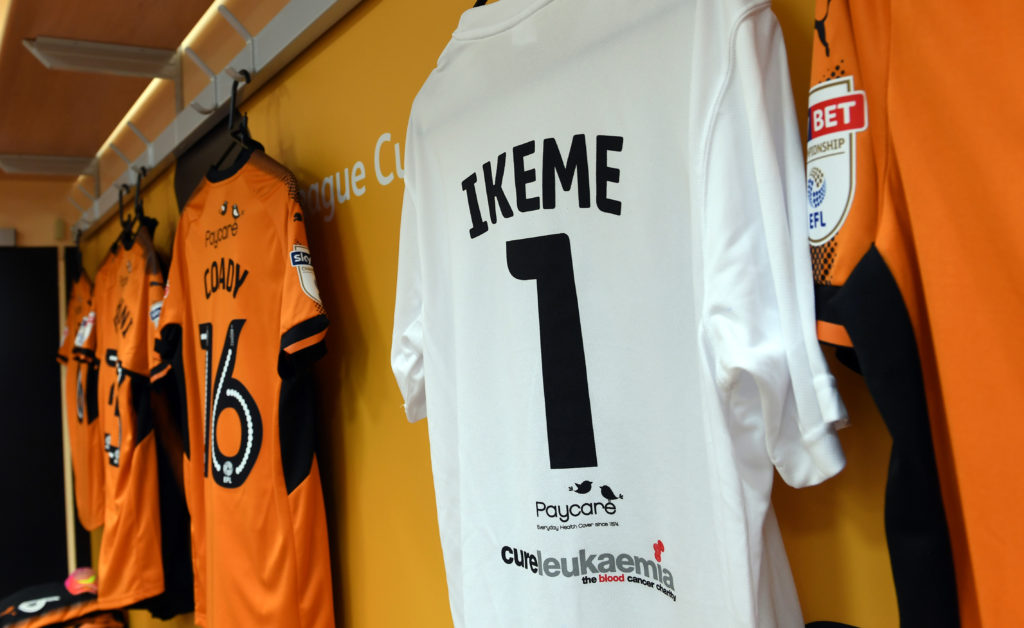 We couldn’t let Carl Ikeme’s announcement of his retirement pass without due appreciation. Paul Berry knew the popular keeper well, both during his time as Wolves correspondent of the Birmingham Mail and then during their nine and a half years together at the club. Here is his personal tribute.

Many things combine to make a footballer. Talent, of course. Determination and willpower to even get the opportunity in the first place. Strength of character to hit back from adversity and disappointment. And then, off the pitch, good character and humility. Carl Ikeme ticked all those boxes – and then some.

That is why it felt particularly unfair when he was struck down with acute leukaemia in this month last year.

But of course, cancer, as so many people cruelly discover each and every day, is indiscriminate.

It is also why, when fighting this dreadful disease, Ikeme would be one you would want in your corner. The first name on the team-sheet.

Many of the former team-mates who know him far better than me have talked of never having shared a dressing room with anyone of a stronger mentality.

He needed that to make his way at Wolves and to break through from the fierce competition of a goalkeeping department littered with home-grown high quality over the last decade and a half.

Like Matt Murray and Wayne Hennessey, Ikeme emerged from the Wolves academy. In contrast to those two, though, he had to wait for his first sustained opportunity.

He made his debut in the Carling Cup against Chester in August, 2005. He next turned out for Wolves in the same competition against Chesterfield a year later, followed by a League bow for the club as an 87th minute substitute against Luton.

Thirteen appearances followed in the 2008-09 Championship-winning season but there was to be more than a three-year gap between facing Preston in January, 2009, to coming off the bench for what would prove his only Premier League appearance – against Wigan in May, 2012.

So many loan spells, so many different footballing outposts, yet never any complaints and, as it ultimately transpired, all those experiences leading up to the moment; that treasured moment when he was crowned as Wolves’ unequivocal number one.

Bizarrely, as Wolves initially floundered, Ikeme flourished. Effectively first choice for most of the time between 2012 and 2017, Ikeme was blameless for the second of Wolves’ relegation seasons and then immaculate in the League One title success which immediately followed. Just the 21 clean sheets for him that season and a further three for Aaron McCarey.

Pushing on to firmly establish himself at Championship level, Ikeme was also by this time growing – figuratively speaking as he was big and powerful enough already – in his influence around the dressing room.

While previously not appearing to be massively comfortable facing the media – mainly, I would imagine, because he hadn’t played that much – Ikeme became a trusted voice.

He was never one to champion his own credentials or try and take the limelight for any successes. He was respectful, a voice of calm authority. A safe pair of hands in every sense!

Where Ikeme excelled, to the huge benefit of any interviewers, be it the Wolves communications team of which I was part, or any external media, was that he always thought about his answers and thought about his interviews. There were no banal soundbites, no frosty responses; just honest, open appraisals of any given situation, his questioners always being shown total respect and courtesy. 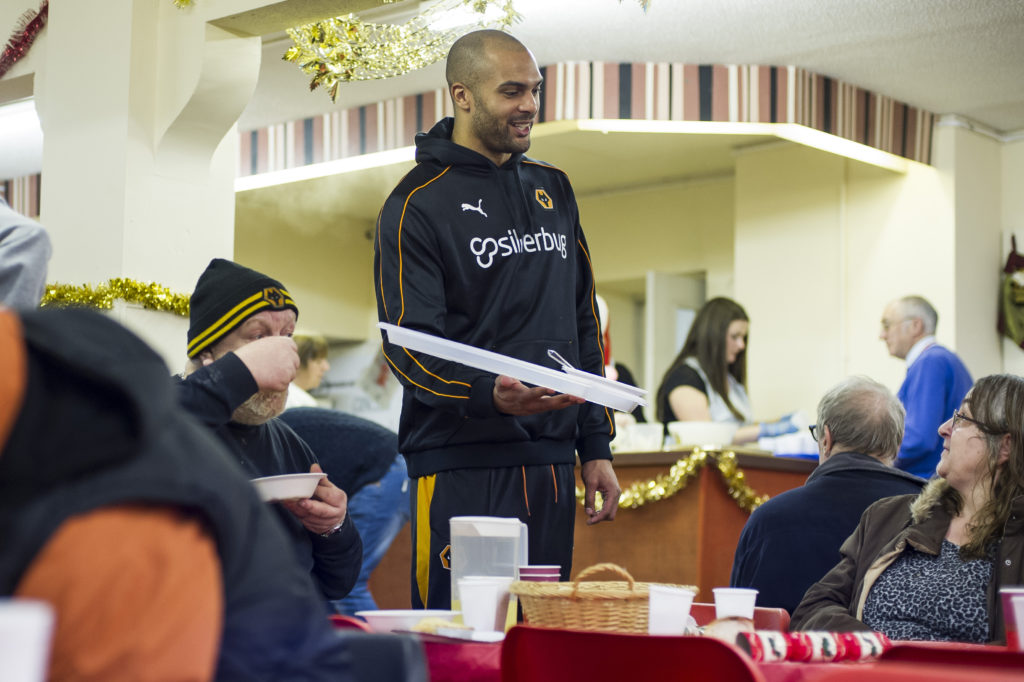 Carl on a visit into the community.

So what do you get when you put all that together? Namely a person who doesn’t get carried away with his own success, who possesses a solid and selfless personality and who can play a bit as well.

You get the reaction on July 6, 2017. The reaction to the devastating announcement that this hugely popular figure had been diagnosed with acute leukaemia.

You get people wanting to show support, in any way possible, from far and wide.

Like others to have called time on their careers at Wolves in recent years, such as Matt Murray and Jody Craddock, Ikeme is a proper, all-round good bloke.

He understood everything associated with representing a club and left everything out on the pitch to try and bring happiness to a set of devoted fans. And that is why, when he needed it most, those fans came through for him.

Granted, I’m not sure either Murray or Hennessey ever put their fist through a tactics board at half-time but Ikeme saw the funny side of the incident slightly later when he and Pat Mountain agreed to a reconstruction (of sorts!) for an off-beat Christmas video.

It is because of who Ikeme is that supporters and members of the public rallied around to show him what he meant to them, and to raise an extraordinary sum of money for the Cure Leukaemia charity which will ultimately save the lives of so many others who find themselves in the same terrible, terrifying position. Out of sudden and shocking adversity came true strength. Out of Darkness, Cometh Light.

Ikeme totalled 274 career appearances, of which 207 came for Wolves. He served eight others as well but scored no goals. And him a former centre-forward! As a youngster at least.

We didn’t know it at the time but a successful career was rounded off with a successful afternoon – a lovely day by the Thames in the spring of 2017 and a 3-1 win against Fulham. There were also ten senior caps for Nigeria thanks to a hugely deserved and almost romantic late arrival on to the international scene.

Yet those stats barely do justice to a career which began at youth level on the pitches of Birmingham and then with Wolves’ academy from the age of 14.

For me, on the football side, three memories stand out. First was a man-mountain performance on a freezing Friday night by the seaside to ensure the brace at the other end from his great pal, Sylvan Ebanks-Blake, secured Wolves all three points against Blackpool.

Then there was his emotion-packed reaction to saving an 86th minute penalty at Colchester which, with Wolves 3-0 to the good, was largely immaterial. Except to him. It was the sign of a winner or, more accurately, a warrior.

Finally, I recall a breath-taking FA Cup display at Stoke – save upon save upon save – which demonstrated that, with a fair wind and like Murray, he could have excelled on the Premier League stage. Not to mention going to a World Cup, which, in the footballing sense, was probably the cruellest cut of all.

However, the over-riding and most pertinent memory for me of working with Carl over such a lengthy period had absolutely nothing to do with football.

It was when we organised a Christmas visit to the Good Shepherd Centre in Wolverhampton city centre and Carl, Aaron McCarey and under-23 lads Aaron Simpson, Ben O’Hanlon and Tendai Matinyadze served lunch to the homeless and most vulnerable members of our society.

To say it took them out of their comfort zone is an understatement but they were all fantastic. Busying themselves around the tables, chatting, listening, just doing their bit to try and bring a smile – just a little bit of humour and fellowship – to those who really needed it. And to folk who had no idea who these footballers were. 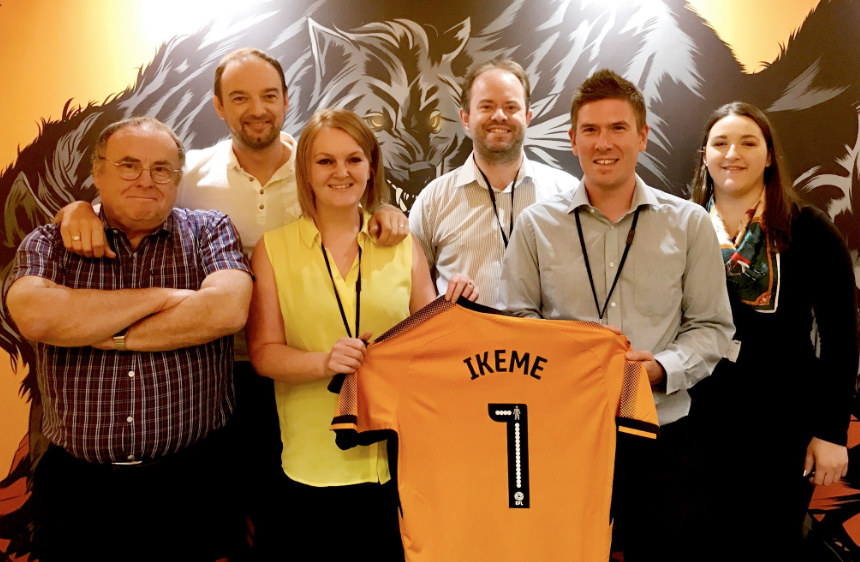 Always highly popular with work colleagues….this group includes Paul Berry (pictured above the no 1 on the shirt) and the late John Hendley (far left).

Carl didn’t say a great deal after the visit. Strong and silent could sometimes be part of his armoury. And then, on the players’ day off a week later, I took a telephone call.

“It’s Carl. I am in town and my car is full of stuff to donate to the Good Shepherd. Where do I take it?”

Well played Carl. Well played. And good luck. On to the next chapter…