Adding A Voice To The Mystique Of Our Heroes 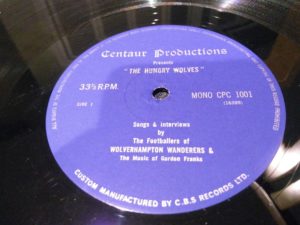 It’s a record! Voices from the dressing room.

Have you sifted through your record collection lately? Could there possibly be an offering in there from the Molineux dressing room of more than 50 years ago? California-based Charles Bamforth spins another super yarn for our readers…..

Before the coming of a glossy Molineux match-day programme for the first time in 1968-69, Wolves supporters did not know that much about the players.

They were physically more approachable, not cloistered behind all manner of shields as they are nowadays, and we knew plenty about their abilities on the field and where they had come from. But we really did not know them as personalities. There was no wall-to-wall television coverage and the Internet wasn’t even a twinkle in somebody’s imagination.

It was a truly wondrous thing, then, when Wolves brought out an LP (yes, it was the days of vinyl) to celebrate their promotion from Division Two in 1966-67. Here was a first chance to listen to the voices of our heroes and witness them in party mood, albeit at a somewhat contrived event.

As a young Wolves fanatic living 80 miles away, I rejoiced in the album, just as I had been thrilled a few months earlier when Wolves had released a 45rpm two-sider, two songs meant to be Wolves anthems.

My deck has long since given up the ghost but, just by handling this record, I can hear the tunes and words in my head.

Side one is ‘Up The Wolves!’

Up The Wolves! Up The Wolves! Every match we yell and cheer.
We think so highly of them, we come back every year.
There is a team at Molineux and they’re the team for me
You’ll never see a better one, I think you’ll all agree.

And so on.  Not classic lyrics but on days when my pocket money would not allow me to get to the game, I was convinced the playing of this record in my home near Wigan would go a long way to bringing the team good fortune.

The other side was more mellow: The Wanderers Song.

I have no idea who is performing or indeed who Peale Promotions were. I would love to know. I often hum these tunes or even sing The Wanderers Song to this very day.

I know rather more about the LP and I had the chance to re-hear it, having taken it into my neighbouring city of Sacramento to have it transferred to a .wav format (the 15-year-old me would have viewed this capability as science fiction back in the day. The 15-year-old me could not have put Sacramento on a map, let alone think he would go to live in Northern California from 1999 onwards). I really need to get the aforementioned single converted as well. 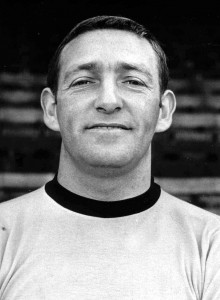 Joe Wilson during his Wolves stay in the 1960s.

The host on the LP is Jimmy Henney. Among other things, he was a presenter on ITV’s Oh Boy!, the first music-only show on British television for teenagers – broadcast live from the Hackney Empire in the late 1950s.

The music on the LP was composed by Gordon Franks and performing on the organ was Wolves’ own Joe Wilson, in his very last days at Molineux. Side two of the LP is for the most part rather forgettable, featuring as it does a bizarre monologue from a man asking that you “Pity Me, I’m the Referee.”

There is also a song sung with gusto by the Wolves players on both sides, entitled “Oh, Oh, What a Luv’ly Game” in which there is a repeated calling to show the referee where his whistle ought to go.

It is side one, though, and the first part of side two that really are worth re-visiting. This is where Mr. Henney interviews the players. As that Wanderers-adoring teenager, it was marvellous for me to hear those voices – in most cases, it was the very first time I had heard them speak.

Side one starts with music:
First Division here we come
Right back where we started from
Keep winning, keep scoring, we’re on our way
The cheerin’, the roarin’, nothing to it, we can do it
Thanks supporters you’ve been great…
And that is the theme: a big shout out to the fans. Thus it continues:
There we are on the pitch every Saturday
Now to you, loyal fans, this we have to say….

Only three players are missing – Ron Flowers, Les Wilson and John Farrington. On sending the .wav files to my friend, Les, he does not recall why he was not on the recording, so I am assuming he was back in his beloved Canada. Quite why Flowers, the most legendary of the Wanderers to play that season, was absent is a mystery.

Henney starts by saying that he had trained with the players that day. He starts his interviews with skipper Bailey and his closest chum, Hunt. Bailey refers to a wonderful team spirit. With Ernie, there is much play about why he is Ernie and not called by his given name, Roger. There is also some mention of Isaac, the significance of which my young ears would not have picked up on in 1967.

Henney refers to Hunt having that day hit one from 30 yards and knocked Walter Winterbottom’s spectacles off. Why was the ex-England manager at Castlecroft in the late spring of 1967?

Next, Henney turns to the two musicians in the side, Holsgrove and Joe Wilson. They discuss John’s nickname, ‘Hank’, and how he considered The Shadows to be “tremendously great”. And then to Wilson, ‘The Quiet One’, an ironic nickname on account of his chirpiness and his habit of taking his accordion on to the coach wherever he had played.

The older of the two keepers was referred to as ‘Fearless Fred’, having had that nickname for the ten years that made him second only to Ron Flowers in seniority in the squad. And so to ‘Lofty’, all of ‘nointeen’ years of age. “Who is this coming in?” asked Henney. “Oh, it’s Duggie”, Phil Parkes replies, “Duggie Woodfield.”

There is no real explanation of the nickname, although Woodfield (with an accent that sounds more northern than his native Leamington Spa) confessed to also being known as ‘B+.’ He says that “it’s the boss’s idea, because I call him Alf.”

The conversation turns to Bobby Thomson, ‘Chippy’ as we know.  Henney calls him an “old, young, handsome man”, before moving on to Gerry Taylor, for whom we get ‘Fred Crint’, which is not explained. Then ‘Crunchy’ is used and explanations are probably unnecessary.

Next up are “Wharty and Waggy”, men with similar Lancastrian accents. Terry Wharton, like others such as Davies and Thomson, mentioned that he was especially pleased with the winning of promotion, because he had also been part of the relegated side.

Poignantly, Waggy says: “Personally, I have never won anything in football.” Happily, that would be corrected in 1974.  Both wingers emphasise how much the fans had contributed to promotion, especially those following the side away. “It must cost them a fortune,” says Wagstaffe.

Jimmy Henney was renewing acquaintance with David Burnside, the two of them recalling that it was in the latter’s Southampton days that they first met. The ball-juggling midfield reckoned that Wolverhampton was his happiest move to date.

One of the other inside-forwards, Peter Knowles, was ‘younger and more exhuberant’ in the words of Burnside. Henney calls Knowlesy ‘Busby Bonce,’ but has to explain to the youngster that it is on account of his big head of hair, making him look like a Buckingham Palace guard. Luckily, Knocker laughs.

To side two and a clearly separate recording of an interview with Derek Dougan – by far the longest, slickest and, by its very nature, the least natural and satisfying. 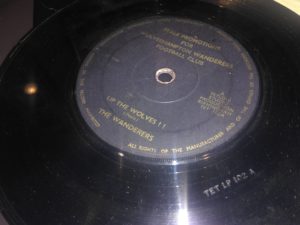 We finish with Hawkins and Buckley. Graham says that his nickname of ‘Harry’ first arose on the tour to the West Indies in 1964, although very plausibly he says that he was given it a year later by Ronnie Allen, a big fan of musicals.

Harry the Horse was a character in Damon Runyon’s Guys and Dolls. Paddy Buckley says, however, that it’s because Hawkins was a plodder, cutting up the field when he played. Good-natured banter between two players who spent most of the term as stalwarts in a successful Central League side, with Buckley hitting more than 30 goals from the left wing.

Finally, it’s to Ronnie Allen: “I’m a proud man; what more can I say?” Not much, gaffer. It was all really rather special.