And ‘Lovely’ Billy Caused A Blush 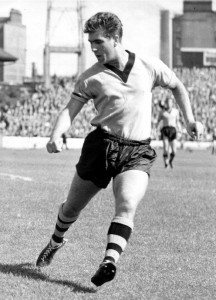 Des Horne in his Wolves hey-day.

We hope to be meeting up in the coming months with members of Cliff Durandt’s family but thought it was time we gave a further glimpse into Wolves’ South African connections of 60 years or so ago with this insight we gained from Des Horne’s former wife, Janice.

Cliff’s daughter and grandsons hope to be over for a Wolves match later in the season and will no doubt be interested in the meantime in some recollections from a lovely lady who made her home in Blackpool after their move there for football reasons in the early 1960s.

Des served the Seasiders after calling time in 1961 on his 52-game Molineux career and the sweetheart he found in Wolverhampton recalled with fondness their time around here.

She also knew Durandt, who headed to these parts from South Africa a little earlier than the man who became her husband.

“I sat with Cliff’s mother and father when Wolves won the Youth Cup by beating Chelsea in the final in 1958,” Janice said when we met at the stadium a good while back. “I can’t remember whether his sister Jenny was there but I can remember her well…she came over to spend some time with him.

“Des stayed in digs with a Mrs Mary Hall in Burland Avenue. Eddie Stuart was there at the same time. Barry Stobart, Ken Knighton and David Thompson were others who stayed there later….she and her husband put them up while they were waiting to go somewhere more permanent but Des and Eddie were there longer.

“Mrs Hall was at the bottom of Burland Avenue (the same road in which Billy Wright had been a long-time lodger with Wolverhampton’s most famous landlady, Mrs Colley). Cliff stayed in Linton Avenue, the next road up.

“When I was about 14 and training to go to a college in the town, I used to travel on the Claregate bus from home in Aldersley Road. I got on in Lowlands Avenue and Billy would often be on. He made me go bright red just by winking at me but, as the years went by, I got to know him better.

“When he was a Wolves director in the early 1990s, my daughter Nicky was at the club showing her half sister round and the two of them got talking. Natalie said she was Des’s daughter and Billy was lovely to them. He apparently said: ‘Please ask Jan to ring me. I’d love to see her again.'”

It was by no means the only time Janice had felt special around the former Wolves and England captain.

“Mary Hall and I walked up Wembley Way together at the 1960 FA Cup final,” she added. “Billy was in a car that went past, very slowly because of all the crowds. I think one of the TV companies provided the vehicle and he offered us a lift but we were quite happy walking, especially as they stayed alongside us for a lot of the way as it was so busy. 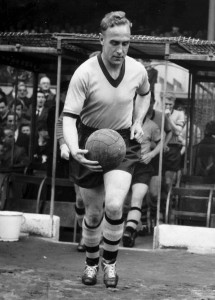 A hero and legend to so many….

“He and Cliff played against each other after they had gone back to South Africa. Abut 25 years ago, Cliff came over here with his son, who has worked successfully as a boxing promoter or manager. Des was so laid-back….he wouldn’t write!

“When I was in Johannesburg, I also remember going to see Cliff’s parents.”