Pals Made Up By Meeting After 42 Years Apart 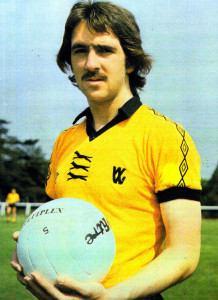 John Black in his Wolves days.

John Black has used a trip to Australia to savour a first meeting in more than 40 years with a close schoolboy pal he accompanied to Wolves in the early 1970s.

And it all followed the sort of out-of the-blue approach the Scot had benefitted from, with Wolves Heroes’ help, when he was reconnected with a teenage sweetheart of his two summers ago.

This time, a Facebook message from a lady in Sydney asked whether he was the John Black who had gone to school with her husband, Alec Jamieson, a proud FA Youth Cup final winner with Ipswich in 1974-75.

“It was so nice to be able to pass the news back that not only I was who they hoped I was but that we were also going out to Australia on holiday a few weeks later,” he told us today.

“Alec and I grew up together in Clydebank and played in the same team going back as far as under-11 for the Boys Brigade side and then for various clubs.

“We both went to Wolves, both went to Ipswich and then lost contact. It was if he disappeared off the face of the earth and, at games against Ipswich that I was involved in later, I used to ask Alan Brazil and John Wark whether they had heard from him because the four of us were pretty close in Scotland.

“Much later, I tried to find Alec through Facebook and Friends Reunited but wasn’t successful, so it has been wonderful to re-establish contact now after what we think is 42 years apart.”

It was the fact that Black’s partner, Roberta, has a son, daughter and grandkids in Australia that took the couple off on a Down Under adventure that included several weeks in Melbourne and one in Tasmania before a ten-day stay in Greece on the way home.

The Jamiesons live in Sydney but flew to the Victoria state capital for the big reunion that contained talk of Molineux matters as well as those in East Anglia and north of the border.

“We were two peas in a pod and went down to Wolves together,” Black added. “It wasn’t so much a trial……it was training in the school holidays with the expectation that we would sign at the end of it.

“We were in the same digs……I am thinking it was in Tettenhall but I was not a choir boy and found myself moved around a few times, so I might be mistaken!

“We had been in the same class at school and then had the same opportunities in football really……we both had Ipswich and Wolves after us. 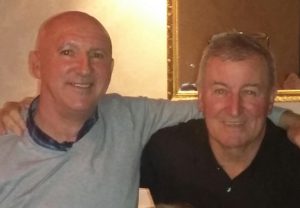 A precious meeting in Melbourne….John Black (left) and Alec Jamieson.

“But while I favoured Wolves over the others – even over Manchester United, Arsenal, Leeds, Everton and the big two Scottish clubs, who were also interested – Alec decided Ipswich were right for him.

“He went there as a defender and did well for a while, including when they won the Youth Cup by beating West Ham in the final. I could have been there as well because Bobby Robson was prepared to offer my dad a job after my mom died suddenly.

“I felt so well treated at Wolves, though, so that’s where I ended up. Alec has talked of having a little first-team experience at Ipswich but I don’t think it was in the League.”

Nevertheless, this is a connection between Portman Road and Molineux that we have not previously reported on.

Black added: “I had played with John Wark for Drumchapel Amateurs – the most famous club in Scotland for producing players. They also helped bring on Alex Ferguson and Mo Johnston. And I knew Alan Brazil from local football, although he went to one of the Catholic schools in Glasgow.

“So I remember asking John and ‘Pele’ Brazil a few years later where Alec had gone and none of them ever mentioned Australia.

“He had apparently fallen out with Bobby Robson when he moved him into midfield as he knew he had Mick Mills at left-back. He went to play for a club in Sydney for a few seasons and then tried his luck in the backroom there. 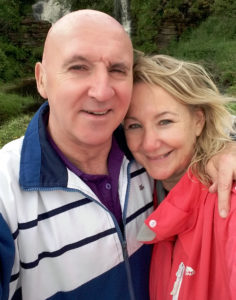 John and Roberta after we helped reunite them in 2016.

“Over the years, Alec has had a good management job in the chemical industry. He is married to a Clydebank girl and one of their two sons has played for Australia at football. They are happy out there but the two of them are coming back to stay with us in the north of Scotland later in the year because he has family near Aberdeen.”

Our research on the Internet revealed one more interesting aside to the tale. Brazil played a couple of games in Sydney at the end of his distinguished career and, on hearing the shout ‘Pele’ from near where he was taking a corner in one of them, climbed into the stand to give a hug to one Alec Jamieson!