Moved But Proud – Hibby On His Special Night

Colleagues Gather To Pay Tribute In Front Of ‘Capacity Crowd’

Kenny Hibbitt – a rare photo of him in a shirt that’s not sweat-stained!

“That’s opened your eyes a bit, hasn’t it?” said Kenny Hibbitt, microphone in hand, to his two young grandsons soon after 11pm on Friday night.

Emotions were, by that advanced hour, running high on the family’s table at the front of Molineux’s Hayward Suite at the sell-out dinner held in his honour.

Hibbitt had not long reminded us that Bobby Charlton was his hero as a youngster – and been stunned to lump-in-the-throat temporary speechlessness when presented shortly afterwards with a letter of congratulation and best wishes, sent and signed by the football knight who struck World Cup glory with England.

For most of another epic They Wore The Shirt tribute dinner – Derek Parkin was similarly feted last year – we had had little idea of how comfortably the main man was handling all the platitudes.

This reaction was the first indication that, surrounded by loves ones, he was not finding it altogether easy to take in the love and appreciation of the 200-plus audience.

“The best £5,000 ever spent,” reckoned Phil Parkes while Gary Pierce said during the two keepers’ appearance on stage together: “He was an exceptional player. Dogged, determined and, if you were in trouble on the pitch, you wanted him with you.”

Just when we thought we had heard all the funny stories and different takes on the big matches and major Molineux events of the era, along comes an occasion like this to open up new talking points.

Well, it’s what happens when you have more than a dozen former players in a room, all of them relaxed, nostalgic, eager to poke a little fun and, above all, add their own accolades.

Barry Powell not only shared digs with this proud son of Bradford….he also lined up alongside him in Wolves’ midfield and was surprised when they each turned up on the same day in the 1990s for an interview to become Hednesford Town manager. In the event, they became boss and assistant, so firm was the friendship.

As for the bits that might have added a new dimension to the reverence in which Tom and Jasper hold their grandad, step forward Geoff Palmer…..

“If we played in London, we would travel down on the Friday and stay in a hotel right by Wembley,” he said. “Hibby and Willie would get on the coach and their holdalls would be clanking on the floor as they carried them down the aisle. They would be carrying four cans of Banks’s Mild each.

“McGarry used to tell us to be in our rooms by nine and if you were next door to those two, you would hear the unmistakable sound of a can being opened….and then another…..

“They also came upon this Asian off licence near where we stayed for one game, so that was their supply topped up.” With a look at the slightly embarrassed 67-year-old in front of him, Palmer added; “Mind you, what a fantastic player!” 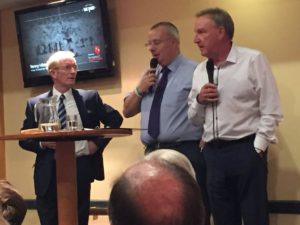 As a further nod to the fact that players’ refuelling meant something else in the 1970s and 1980s, Willie Carr told the tale of the four-hour journey on tour in Scandinavia which he livened up by opening his duty-frees for the enjoyment of he and his good pal. “We stopped for something to eat and I couldn’t find Hibby…..eventually, I saw him sitting up against a lamp-post.”

You don’t play 574 Wolves first-team matches (with 114 goals) without being a class act through and through and Mel Eves, accompanied into the spotlight by John Richards, recalled the awe he felt when watching Hibbitt train at close quarters.

“I was paired with him for this one drill and he taught me, even having played for England Schoolboys, how much I had to do even to become half-decent. I was not a good striker of the ball – he was! – but I played no 11 in the 1980 League Cup final and used my left foot. That was thanks to Kenny, a top man!”

Richards, sat next to Hibbitt, while their wives (cousins to each other) were placed side by side, spiced up his tribute with humour and friendly barbs.

“He blames me for (him mis-hitting) his Wembley goal,” JR said. “He says I distracted him. But I understood him……he arrived at Wolves as a good northern lad. I struggled at first with the accents round here but the esteem we held him in went up when we found out he used to keep racing pigeons. That’s second only to keeping your own ferret!

“He also introduced me to the Lafayette. He knew people and we became those annoying ones who went straight to the front of the queue and were allowed in without paying.

“We got back from a midweek away game once and went there because it was the only place you could get something to eat at about midnight. We all ordered steak and chips. 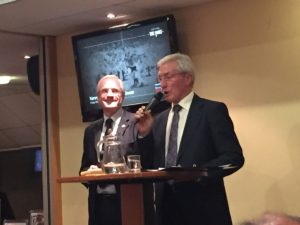 Let us tell you about Hibby…….John Richards and Mel Eves take their turn.

“I asked for the tomato sauce and gave the bottle a shake…..unfortunately, the top hadn’t been put back on properly and the contents went all over Kenny’s light brown suit. It was like a scene from The Texas Chainsaw Massacre.

“It was the closest we have ever come to falling out. He has been a great pal to me, a great lad and a great player.”

Hibbitt, later to reveal that it was in fact a cream ensemble that bore the brunt of the flying dressing, was described by more than one team-mate, in the nicest possible way, of course, as a bit of a moaner.

Referees and Sammy Chung were two parties said to have been among those who had to bear the brunt of the characteristic and Steve Daley preceded his brilliant comedy turn by saying he noted how Hibby always sat behind the management duo on the coach to do some ear-wigging.

“Wherever I went, I was asked what the best midfield was that I ever featured in,” he said. “At Wolves, we would all always work for each other, do everything for each other, train together, play together, socialise together.

“Wolverhampton is a massive draw and players come back here because of the memories of the 1970s. I made a huge mistake when I left here.”

And, turning to the centre of attention, Daley added: “I look back on those times and am privileged to have played in the same team as you. Enjoy the night, pal, because you have deserved it.”

Seats for this dinner had sold out in days and 20 copies of the They Wore The Shirt book that flew off the shelves just as quickly were produced with a special Hibbitt cover, signed by all the players present and auctioned. 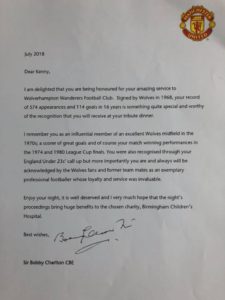 Enough to take anyone’s breath away……a personal tribute from one of England’s finest (please click on photo to enlarge).

The evening, hosted by Steve Saul and also attended by Colin Brazier, Phil Nicholls, Dale Rudge and Colin Taylor, raised more than £5,000 for Birmingham Children’s Hospital, meaning that £42,000 has now been generated by the extended book project in two years.

“It has been one of the greatest nights I have ever had,” Kenny said, his composure recovered. He also predicted ‘something special’ for Wolves over the next five or ten years.

That wasn’t a bad thought to take away from a memorable evening and into the international weekend, Tom and Jasper included.