Send For The Doc

Matt On The March Up ‘Honours Board’

Matt Doherty is set to build on his latest taste of international football by accelerating past some familiar faces in one of Wolves’ main rolls of honour.

The consistent wing-back went on during the second half of the Republic of Ireland’s confidence-restoring friendly draw in Poland last night after remaining on the substitutes’ bench during the thrashing by Wales in Cardiff on Thursday.

It was his third senior cap and enhances Wolves’ foothold in an area in which they have been strong over the last decade or so, with Dennis Irwin, Stephen Ward and Kevin Foley also previously representing the country in the full-back position.

The 26-year-old moved into the Legends area of this site late last season by advancing into the club’s all-time top 80 appearance makers and is continuing to climb the list in the early weeks of the Premier League campaign.

Having missed only one out of 46 Championship games for Wolves in their victorious title-winning 2017-18 season, he has now played 212 League and cup matches for them – a total that leaves him alongside his good friend, Danny Batth.

The on-loan Middlesbrough centre-half isn’t the only familiar face he is set to leave behind in the pecking order, either. Kevin Foley currently stands one match ahead on 213 but the opportunity is there for the present incumbent to move into the distance, with Wolves having a Carabao Cup assignment against Leicester as well as top-flight meetings with Burnley, Manchester United and Southampton in the second half of this month.

By playing in those fixtures, Doherty would move into the top 70 appearance makers in Wolves’ history and past Paul Cook, Mel Eves and others.

Nowhere is there a clearer record of such matters than on Wolves Heroes, so do please click on the ‘Legends’ reference above and start to work out where the Dubliner might climb to over the course of the coming months.

Now may also be a good time to remind ourselves of the turnover of players at Molineux since this website first brought to supporters’ attention in 2016 the fact that we were about to salute the 1,000th man to play League football for the club. 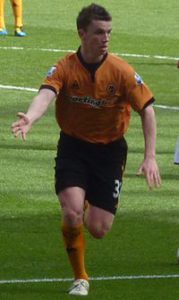 Kevin Foley…..about to be joined by a fellow Irish full-back.

That honour went to Jon Dadi Bodvarsson in the opening-day draw at Rotherham two seasons ago but it’s revealing to note that another 33 players – up to and including the match-winner at West Ham 11 days ago, Adama Traore – have made League debuts for Wolves since then.

The ‘Afobe to Zyro’ heading above is the one on which to click to see the full chronological list of all those to have represented the club in the major domestic competition.