A Well-Deserved Shout-Out For Workaholic Mel

Some time in the next few days, Mel Eves can expect his phone to ring and to be asked once more for the secret of how to bring down Manchester United at Old Trafford.

It was he, the small matter of 38 and a half years ago, who struck the goal when Wolves last won at the venue. Each time the side go back there, he is asked for his recollections, how he scored it, how the winning moment was received and much more.

Mind you, he is asked for quite a lot. And he rarely disappoints. More than any other Wolves player, Mel Eves is out there – mixing with fans, supporting charity days, attending funerals, making motivational talks to sportsmen and women, watching matches for local radio, writing a long-running, well-read Sunday Mercury column and generally putting his hand up to help when and where he can.

“My WM work is keeping me very close to the present-day Wolves, which I love,” Eves said. “Who wouldn’t?

“I am lucky enough to be called upon to summarise on quite a few of the games and that has been a pleasure in the last couple of seasons in particular.

“I have had friends in the media over the years and always tried to cooperate with them. That side of the game has changed so much but watching the matches remains great fun.”

Eves was in the press box for the home draw against Manchester City and then the victory over West Ham 11 days ago. He will also have the headphones on for the forthcoming clashes with Burnley tomorrow and United next Saturday.

That, though, is a small part of it. Two weekends ago, most of the journey he and I shared with the BBC’s Mike Taylor back from the Olympic Stadium was spent with him on the phone.

Not to eulogise over Adama Traore’s late goal or to plan a celebratory Saturday night out. Eves was busily – and with difficulty – assembling his Wolves All Stars team to play a game at Alveley the next day.

He has run the side for an astonishing 22 years and the money raised along the way has been mind-boggling. The team were back in action against Stafford-based Brocton last Sunday; cue more headaches over unavailability and potential late cry-offs. This is quite a commitment.

Not that that has ever put him off. He was one of the ex-players to accept the challenge when I looked for volunteers for the Hawthorns to Molineux walk in aid of Acorns Hospice in 2012 and he is on permanent stand-by to play in the various golf days involving Wolves Former Players Association, although he is one of very few of them not to have membership at a local club.

The following year, he used his stint as Wolverhampton Rotary president to organise a dinner reunion of the 1980 team of League Cup winners which, as a Wednesbury boy, he was so proud to be among.

Mel is just one of those willing characters we need among us. He is planning a visit in the near future to see former Molineux physio Toby Anderson, who is recovering from illness, and does his share of hospital trips to see stricken colleagues and supporters.

“You just do what you can,” he added. “The game has been very good to me.

“Yes, there are more funerals to attend than any of us would like but there are much happier occasions as well. 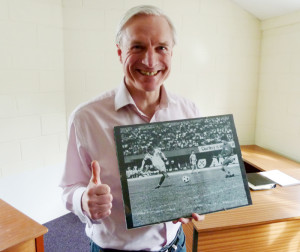 Mel as pictured by Wolves Heroes with one of his England B keepsakes.

“I try to keep in touch with the players I played with and a few of those I faced. I saw Paul Parker at West Ham this month and had a natter with Mark Lawrenson in the press room a year or two back. Covering the Wolves matches offers me those reacquaintances.”

Eves’s large Facebook following is testament to how much he spreads his wings, in the Wolves family especially, and he is always available to chat.

Which is very good news for the reporters who will be previewing the United v Wolves clash over the coming days.