Racing Along At 90-Plus

Many supporters can probably take a good guess at naming Wolves’ oldest living former player – but how many can correctly identify their longest-surviving ex-manager?

Our thanks go to The Times for this week reminding us that a man who sat in the boss’s chair in the 1980s turned 90 in the spring.

Just to put this in perspective, Bill McGarry would have been 91 had he still been with us and Sammy Chung, remarkably, is now 86.

It is also a time for managerial landmarks because, in the not-so-distant wake of the 100th anniversary of Stan Cullis’s birth, Graham Turner has not long turned 70, Mick McCarthy celebrates his 60th birthday in February and this coming Christmas Eve will mark John Barnwell’s 80th.

But they are all still well behind one Thomas Henderson Docherty, who was wished even more notable happy returns a few days after Wolves secured the Championship title with their handsome victory at Bolton in the spring.

The Doc entered this world in April, 1928 – and probably started talking 20 to the dozen a few weeks later!

His time at Molineux was not a happy one, of course, but managerial highlights came at Chelsea and Manchester United and with Scotland. He also famously worked at Aston Villa with Doug Ellis, who passed away yesterday at 94. 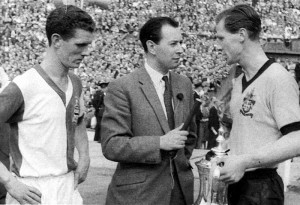 So, for those who didn’t latch on to who we were referring to in the first paragraph of this story, here are some more age statistics….

Bill Slater, whose birthday falls five days after Docherty’s, is 91 and believed to be the oldest surviving Wolves first-team player, the mantle having previously been carried by Sammy Smyth.

Bert Williams was a few days short of his 94th birthday when he died in 1914 and Alf Crook and Jimmy Dunn also lived into their 90s.