Oh that Jesse Pye was still around today. Not just for his terrific record as a goal-scoring Wolves forward but for much, much more.

There is perhaps a collective guilt around the fact we didn’t question these legends further when we had the chance. Pye played junior football in South Yorkshire, became a £12,000 record signing at Molineux, scored a hat-trick on his Wanderers debut and netted twice in becoming an FA Cup final hero in 1949.

There are a few headlines in that lot for starters. On top of all that, though, were his wartime memories.

Pye served with the Royal Engineers ‘in different theatres of war’, as one reference book puts it, and travelled abroad more happily in fulfilling an unusual international career.

Maybe, like others, he would have wanted to confine his recollections to the football fields rather than the killing fields but what sights he must have witnessed and what highs and lows he experienced in his 65 years.

Even the pre-Molineux Pye had a tale to tell. He played in the village of his birth, Treeton near Rotherham, and elsewhere locally before signing as an amateur with Sheffield United around the start of the war.

He moved to Notts County a few months after hostilities ceased and it was from there that Wolves plucked him from under the noses of other major clubs just in time for him to make an astonishing debut with three goals in the 6-1 home slaughter of Arsenal on the first day of League football after the war. 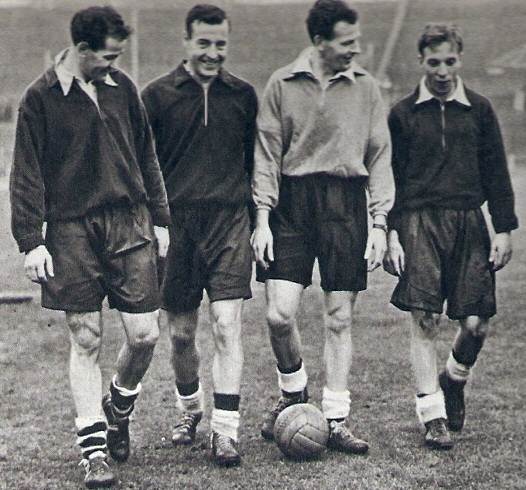 Those fine statistics added up to the small matter of 95 goals in only 209 senior appearances before he went off to Luton in 1952 – a look at the Legends and Goal Aces sections of this site will show where those two hauls leave him in the pecking order.

The forward’s one full senior England cap came in a losing team containing Bert Williams and Billy Wright against Ireland at Goodison Park in 1949. Three B caps and honours with the Football League side also went his way, though, some of that latter representation in tandem with Jimmy Mullen.

Frustratingly, neither could line up alongside Gil Merrick, Bill Nicholson, Wilf Mannion, Nat Lofthouse and any number of other household names in February, 1950, when Molineux staged an inter-League match for the first time since 1939. They were on FA Cup replay duty for their club at Blackpool when they might well otherwise have been playing in a crushing victory for the Football League against the Irish League in front of 14,500.

An injury suffered by Portsmouth’s Jack Froggatt at Molineux then saw Mullen – but not Pye – promoted a few days later to the England B team at home to Holland in the city of his birth, Newcastle.

And both toured with England B at the end of that 1949-50 campaign, heavy defeats against their Italian counterparts in the San Siro Stadium (5-0, with an attendance of 45,000) and Holland in Amsterdam (3-0, watched by 60,000) being partly attributed to the fact that the selectors wanted to give all members of the party at least one run-out.

For Mullen, this trip was effectively a trial for the World Cup in Brazil later that summer – a big date he kept after forming an all-Wolves left-wing pairing with Pye in a 2-1 victory in the Grand Duchy on Sunday, May 21. Both of the side’s goals came from Reg Lewis, the Bilston-born forward who also netted twice when Arsenal beat Liverpool in the 1950 Cup final. 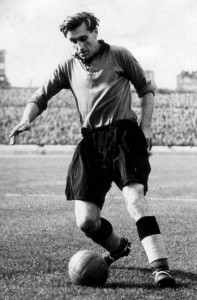 Jimmy Mullen…..a team-mate with England as well as Wolves.

This was also the summer in which Mullen made history by becoming England’s first substitute – in the 4-1 win over Belgium. Pye was less fortunate than his club colleague from then on and, having faced the Belgians in a 1946 Victory international and the Irish League in a win for the Football League a few months ahead of the FA Cup final glory he and Wolves achieved, didn’t represent his country again.

But what a career the no 9 or no 10 nevertheless had. He was very much one of the players who accelerated the club’s rise to greatness and shared with others the consolation that he would probably have collected many more caps in another era.

He subsequently signed for Derby and then played and managed Wisbech Town before leaving the game and running a hotel in Blackpool. What company he would have been over a pint!