Charles Bamforth has followed Wolves avidly since the early 1960s, although in the past two decades from much further afield. Here, in the latest of his expert contributions to this website from his home in California, he investigates one of the cornerstones of Molineux’s glory years.

There is an article on the Web headlined “How One Man’s Bad Math Helped Ruin Decades of English Soccer”.

You might suppose it to be full of dreadful accusations about the irretrievable damage caused by a villainous individual, evidenced by the downfall of football as we know it. 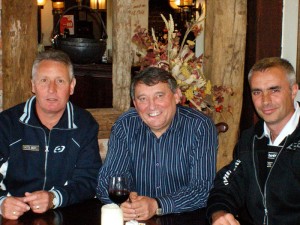 Graham Taylor in between Keith Pritchett and Darren Bazeley…..with Watford on their minds.

The article certainly invokes Charles Hughes, whose name is, for some, forever associated with a dip in the national team’s progress. However, it also draws attention to the success Wimbledon had thanks to this man’s conclusions. While their football wasn’t pretty, Wimbledon were surely a team who achieved more than the sum of their component parts.

The piece might just as easily have mentioned Graham Taylor, for was it not he who took Watford to a beyond-wildest-dreams second place in the top division on the basis of the tactics advocated by the man pilloried for his principles?

Most of all, though, the item might most justifiably have referred to Wolves. For it was the legendary Stan Cullis that, in 1954, became the first manager of real note to be impressed by the findings and theories of Wing Commander Charles Reep.

And if anyone would care to suggest that the Cullis sides of the 1950s were anything less than successful or exciting to watch, they are surely in denial.

Cullis described his involvement with Reep in his autobiography, All for the Wolves. He remembered watching the England v Hungary game at Wembley in 1954 alongside trainer Joe Gardiner, when the Magyars humiliated Wright et al.

“We both thought that the play of the Hungarians confirmed most of the ideas we were trying to use at Molineux,” he wrote. “Wolves went for goal in a direct, incisive fashion that contained scarcely any frills, although every player was a master of ball control and well able to indulge in tricks if they were needed.

“In Budai and Czibor, Hungary had two straightforward, fast wingers. They were the kind of wingers I considered essential to successful football.

“Basically, the Hungarians tried to move from one end of the field to the other in a minimum number of passes.

“I was more than pleased with this confirmation that we were working along the right lines at Molineux. If any further proof was required, it came with a knock on my office door one afternoon shortly after the visit to Wembley.”

Charles Reep, aged 50, had taken it upon himself to call at Molineux. At the time, he was an accountant officer stationed at RAF Bridgnorth. Cullis was intrigued. 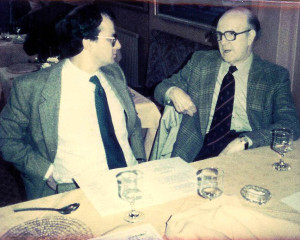 What Cornishman Reep was presenting to him was a system for recording every move of a football match. During their two-hour conversation, he showed Cullis his analysis of the Hungary game and completely reinforced the manager’s opinion that the lower the number of passes, the better.

Straightway, Charles Reep started recording Wolves’ games using his techniques; procedures he had first developed when watching Swindon and which were first employed by Brentford at the start of the 1950s. The Wolves hierarchy listened and further honed their success.

Reep believed that most goals were scored after fewer than three passes. In other words, by getting the ball forward as soon as possible. Sure, that could mean the longest of balls, namely the mighty, optimistic hoof from the keeper.

But just think back to the days at Molineux even after the Cullis era. Think of a long throw from Phil Parkes to David Wagstaffe, a deep cross to the head of Derek Dougan and a nod down for John Richards to whip the ball home. A thing of beauty – Reep was vindicated!

He would talk about POMO – the Position of Maximum Opportunity. In other words, the spot in the penalty area from which goals were most likely to be scored when crosses went in. Cullis would patiently scrutinise the data he supplied.

“It helped me modify and improve points of tactics which were either costing us goals or reducing our own scoring potential,” the manager added.

Let us not forget that apart from wonderful wingers like Johnny Hancocks and Jimmy Mullen and splendid front-runners such as Roy Swinbourne, Jimmy Murray and Dennis Wilshaw, Wolves had plenty of ball players in the heart of the field, not least Peter Broadbent.

In his book, The Manager (2016), Ron Atkinson drew attention to the impact of Charles Reep, having himself been a youngster on the Wolves books in 1954.

“Wolves employed an analyst called Wing Commander Charles Reep, who argued that most goals resulted from three passes. It formed the basis of the theories that Graham Taylor was to use so successfully at Watford,” he wrote.

“Reep dominated Molineux to the extent that, if you played a square pass in your own half, there would be trouble. If Stan Cullis saw it, he would go absolutely barmy.

“Before the Wolves v Honved game, Cullis took us all into the Molineux Hotel to watch a film of the Hungarians beating England 6-3 at Wembley the year before. We analysed the first goal: Hungary score almost straight from the kick-off. There are half a dozen passes, Jimmy Dickinson tries to get his toe-end on to one of them and turns it into a square pass. The ball is then played out to Nandor Hidegkuti, who whacks it in the net. Cullis turns round and says: “There you go, three passes”.

“Through my teenage eyes, it looked like 15 passes but, naturally, nobody in that room had the courage to say so.”

Perhaps, then, there was sometimes an optimistic counting of passes but perhaps the real message was: “Keep it simple”.

Reep published his findings in places like the Journal of the Royal Statistical Society. Those who pored over the data, statistics garnered up to and including the 1966 World Cup, are very ready to criticise. Nobody has been more judgemental than Jonathan Wilson, in Inverting the Pyramid: The History of Football Tactics.

In it, he says: “It is, frankly, horrifying that a philosophy founded on such a basic misinterpretation of figures could have been allowed to become a cornerstone of English coaching. 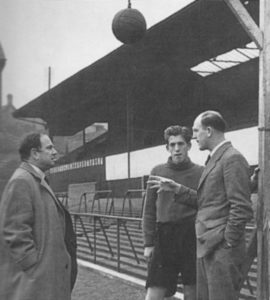 It seems Charles Reep was a camera-shy individual. Can any of our readers confirm whether or not he is the gentleman on the left of this photo, alongside Stan Cullis and Peter Broadbent?

Reep may not have been entirely correct in his theories. Moreover, it seems reasonable to argue that the tactics and capabilities of the opposition, including an adaptation to the approach taken by the team adopting the Reep-based system, would often thwart even the most pass-abstemious of opponents.

All I would say is that, if I had the choice between watching a side playing endless keep-ball deep in their own territory or watching a team of genuine skill scything through the opposition with a minimum of passes, I know my preference.