Historic Hotel That Has A Cherished Past 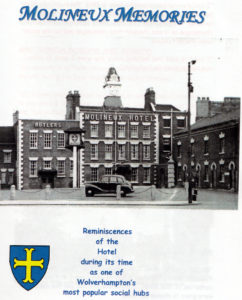 The front cover of the little-seen Molineux Hotel booklet.

Dave Woodfield had his wedding reception there, Pat Neil stayed overnight in one of its rooms before his debut and Les Wilson recalls the Wolves squad having a pre-match meal in the dining room prior to a game at Albion.

Now, we have belatedly discovered that one of the young hopefuls who followed such figures on to the club’s playing staff actually went into print about the place.

For several decades, Molineux Hotel played a considerable part in the lives of Wolves players but we hadn’t realised just how much in the case of Nigel Williams, a mid-1970s full-back who played 11 first-team games for the club.

He is, after all, somewhat off the radar as he returned to live in his native Kent around 40 years ago.

But, unbeknown to many, he makes regular visits, pilgrimages almost, to Wolverhampton, largely because his wife, Jan, still has family here and their daughter, Anna, is an avid fan.

And it is those links that led Nigel to answering a call for contributions when a booklet about the hotel was produced around the time of its reopening in 2009.

“It was probably Jan’s brother, Derek Thom, from Penn, who read that this publication was coming out and was going to include the various stories people had of the place in the past,” he said.

“I spent a lot of time there as a young player and used to love looking at the old Wolves photos on the walls. It was very special in our lives because it was there I met the girl who would become my wife.

“She was working as an assistant at the Art Gallery and the club used to pay for us to have a lunch there every day after training.

“I was probably a bit awkward about following up my interest after seeing her across the room because I wasn’t the best at starting a conversation. But I noticed she had a dog with her, a smashing collie-Alsatian cross called Timber, who I discovered she used to take to work every day.

“To break the ice, I asked this waitress called Pat, who was kindness personified, to take a bit of meat for Timber. When Jan looked over, I put my hand up to acknowledge that it was my idea.

“From there, we got talking and started going out, although it caused some problems for the relationship when I moved to Gillingham three or four months later.” 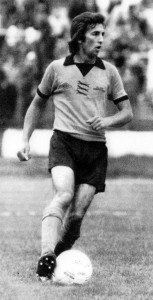 Williams certainly saw plenty of the motorway network at that time but also used it to good effect when his new club played Third Division games in the north-west.

“On the way back from places like Bury and Preston, the driver would pull on to the hard shoulder at Willenhall and I would rush out and up the embankment to where Jan was waiting for me in the car,” he added.

“The other lads used to be cheering me on….you would probably get a call from the police now for doing what I did!”

So what did the defender actually write in the 16-page booklet? Here is a sample: “My story of the Molineux Hotel began in July, 1970 when I arrived at Wolves from Canterbury as a fresh-faced 15-year-old.

“The hotel became our lunchtime eating venue for the next five years; 18 apprentices every day, through from pre-season training until the end of the season and Cup Final day in May.

“Our food was provided to ensure we had at least one decent meal a day and to help ease the homesickness we all felt, with missing our mums’ cooking.”

Nigel went on to describe the hotel as a ‘magical place that was full of life, laughter, music and companionship’ and a meeting haunt for various townsfolk, such as Polytechnic students, Art Gallery staff, workers from the nearby Tarmac offices, building site construction men and, of course, aspiring footballers.

“The hotel, like the rest of Wolverhampton, was vibrant,” his article continued. “The dartboard was in constant use, the juke-box in the corner never stopped and had a huge variety of tracks to cover the cross-section of tastes throughout the bars. 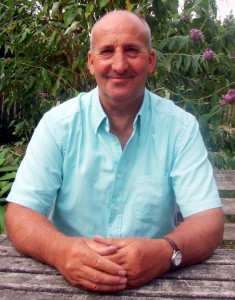 Nigel in much more recent times.

“Our greatly varied ages, backgrounds and cultures held no boundaries. The moment you entered the room, you were uplifted and the friends I made remain friends today.

“Marilyn and John ran the hotel then with their two young daughters – I can’t remember their surname. But I was introduced there to my first pikelet and cob. Being a southerner, I’d never heard of either but I was soon enjoying both.”

Nigel also remarked on his regret at seeing both Molineux and the hotel falling into a state of disrepair in the 1980s and is delighted both are now restored as magnificent features on the city skyline.

The Williams’ Wolverhampton-born daughter, Anna, has had sadness of her own in more recent times…..she was apparently very sorry to see Danny Batth leave early this season!